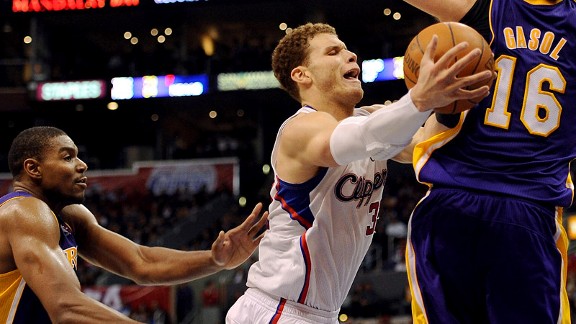 ClipperBlog’s Charlie Widdoes, Michael Shagrin and Jordan Heimer preview round two of the hallway series between the Clippers and Lakers.

1. Who should the Clippers be more concerned about defensively: Kobe Bryant, Pau Gasol or Andrew Bynum?

Charlie Widdoes, ClipperBlog: Bynum.  We all saw what Bynum could do in the post when he chewed up DeAndre Jordan during the preseason.  If he is getting the ball, it means that Kobe Bryant is passing it. That also means that Bryant is probably taking fewer long 2’s — a shot that the Clippers would hope to force him to take, even if he’s hitting 46% of them this year.

Michael Shagrin, ClipperBlog: Pau Gasol. In the Lakers 2-point loss to the Pacers, Pau dished out 10 assists, reminding us of the fútbol culture that shaped Ricky Rubio. If Gasol (finally) makes good on his desire to occupy the post as a dominating presence, the Clippers would be toast. With the combination of Griffin’s relatively weak defensive post game (though he’s gotten progressively better against Gasol in particular) and the team’s inability to play quality perimeter D, a hot Pau Gasol could spell the first Clippers loss to the Lakers since the Chris Paul Sweepstakes.

Jordan Heimer, ClipperBlog: Theoretically, nothing should scare the Clippers more than the thought of DeAndre Jordan stuck on the bench in early foul trouble while Andruw Bynum feasts on the three-headed something-less-scary-than-a-hydra of Solomon Jones, Reggie Evans, and Brian Cook.  Of course, if last week’s game is any guide, Kobe won’t look inside often enough to fully capitalize on the Clippers’ defensive lapses in the paint.

Charlie Widdoes, ClipperBlog: Limiting turnovers.  Both have become Clipper strengths.  As pointed out by commenter Tim, the Clippers have out-rebounded 6 of their last 8 opponents (and four straight), so that facet of the game is coming around after a slow start — thanks, Reggie Evans!  But in the absence of a proven offensive system to create good looks, not turning the ball over is most of what the Clippers have going for them.

Michael Shagrin, ClipperBlog: As long as there are no curses sent down from the Hammy Gods, the more important factor will be limiting the Lakers offensive rebounds. If Kobe continues his passionate love affair with the jump shot (that really shouldn’t be an “if” clause), then the best looks for Bynum and Gasol will come from their ability to corral boards from strategic post position. An intelligently active DeAndre Jordan would be a primary antidote to such a scenario.

Jordan Heimer, ClipperBlog: Turnovers. There’s no hard and fast formula here. But the Clippers have already shown an ability this season to get killed on the boards and still win, in large part because so few of their possessions end without a shot. If the Clippers continue to protect the ball the Lakers will have a tough time winning.

3. Fact or Fiction: The Clippers take the second game in the hallway series and beat the Lakers tonight.

Charlie Widdoes, ClipperBlog: Fiction.  Without knowing how Chris Paul will be after missing five games, and considering just how much he had to do to carry them to the win last time, it’s tough to pick the Clippers. Plus, all the recent talk about Bryant’s negative impact on Gasol and Bynum could lead to a collective acknowledgement that they need to share the ball to win — a bad sign for the “away” team.

Michael Shagrin, ClipperBlog: Fact. With Chris Paul back in the lineup, the Lakers will be facing the same issues they saw in their first three matchups with the Clippers. It’s not a coincidence that the Clippers are built to exploit the Lakers’ frailty at the point. Accounting for the expected shortcomings of Paul coming off the injury, look for a big game from Mo Williams who didn’t have the opportunity to suit up for the first Clippers-Lakers regular season game.

Jordan Heimer, ClipperBlog: Fact (with a major caveat). Two weeks ago, Chris Paul had his best game of the season against the Lakers. It was also the last time he played. If Paul is at full strength, expect to see more of the same: a barrage of pick and rolls that force Laker switches, followed by a whole lot of backpedaling big men trying – and mostly failing – to keep up with CP3.