3-on-3: Clippers vs Grizzlies 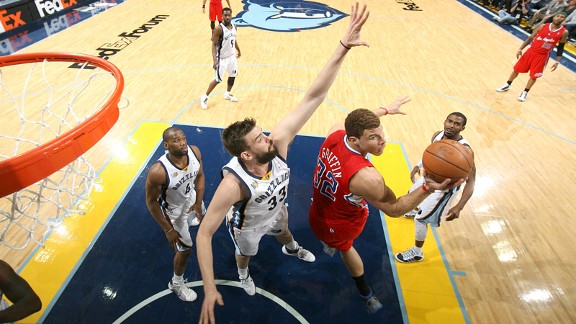 1. Who would you rather have for this Clippers team: Chauncey Billups or Tony Allen?

Charlie Widdoes, ClipperBlog: Tony Allen, and it’s not even close.  Chauncey was brought in to play off the ball and knock down shots, but is shooting only 33% from the floor with questionable shot selection and a declining 3-point stroke that once upon a time made up for his offensive weaknesses.  Oh yeah, and he’s even more of a defensive liability than he’s ever been (110 points allowed per possession), whereas Allen locks down the best of the best (98 defensive rating).

Jovan Buha, ClipperBlog: Besides Caron Butler, the Clippers have no length on the perimeter. More importantly, they lack a defensive stopper and are susceptible to scoring outbursts by elite scorers. You know the story. Allen fits both needs. While Billups has added leadership, experience and in-game decision-making to the roster, he’s not the best fit with Paul. Allen can’t shoot, but he’s an underrated offensive contributor. Plus, I’d love to ask him about his tweets.

Breene Murphy, ClipperBlog: Definitely Tony Allen. One of the biggest flaws of this Clipper team is that they don’t have a single player that can consistently lock down the opposing team’s best wing. Tony Allen is up there in that Andre Iguodala/LeBron James/Luol Deng category of elite wing defenders.

2. Over or Under: The Clippers turn the ball over 15 times against the Grizzlies.

Charlie Widdoes, ClipperBlog: I’ll take the under.  For all their other issues, I don’t see them coughing it up more than their season average of about 14 a game, especially if Chris Paul is able to play more minutes in his second game back.

Jovan Buha, ClipperBlog: Over, but barely. The Grizzlies have the 11th best defense and lead the league in steals and opponent turnovers. Meanwhile, the Clippers turn the ball over the third-least amount of times per game and are second in opponent steals (how many steals their opponents get). Something’s got to give. I say the Grizzlies (force 18 TOs) and Clippers (average 14 TOs) met somewhere in the middle — 16.

Breene Murphy, ClipperBlog: Over. There’s not just Tony Allen, but Mike Conley to pester the Clippers into turning the ball over. And with the Clippers playing on the second night of a back to back, I’d guess they’d be slightly tired and given to sloppier play.

3. Fact or Fiction: The Clippers get a double dose of Gasol and lose to the Grizzlies tonight.

Charlie Widdoes, ClipperBlog: Fact.  Paul was unable or unwilling to put the type of pressure on the Lakers defense that the Clippers need from him, and if that’s the case again, the Clippers should struggle.  Considering it’s the second part of a back-to-back and hamstrings tend to linger, I’m leaning toward the Griz, who come in having won 7 of 8.

Jovan Buha, ClipperBlog: Fiction. Some may overreact to the Lakers’ loss, but the Clippers were ahead almost the entire game and were a couple possessions away from being 10-5. The Grizzlies have won seven of their last eight, but besides defeating the Bulls without Derrick Rose, they’ve yet to have an impressive victory in the streak. I expect Paul to bounce back from a lackluster performance and the Clippers to silence the noise from the growing doubters.

Breene Murphy, ClipperBlog: Fiction. If Blake were required to guard Gasol, I would say fact, but that’s not the case. Blake will probably see most of his minutes on Marreese Speights, who doesn’t exactly frighten me. Nor should Speights be an obstacle when Blake’s on offense. The bigger concern is whether Chris Paul plays as tentative as he did last night coming off a hamstring injury.