The Los Angeles Clippers are rolling. Sporting the league’s second ranked offense in terms of offensive efficiency, they’re sitting at a 7-4 record with five convincing wins against likely Western Conference playoff teams. Offensive dynamism was expected with the additions of J.J. Redick and Jared Dudley to an already explosive pick-and-roll attack with Chris Paul and Blake Griffin. However, the Clippers’ long-term success likely hinges on their ability to stop opponents and to date, they’ve been a decrepit bunch on defense. The Clippers allow 106.8 points per 100 possessions, making them the NBA’s second-worst defensive squad behind the Detroit Pistons.

The brunt of the issue lies with the second unit. It’s well documented: The Clippers’ bench is a problem, one that persists on both ends of the floor. With the exception of Reggie Bullock and Ryan Hollins, the second unit is allowing perilous individual defensive numbers. The starting lineup has been impeccable, permitting just 100.9 points per 100 possessions. This figure, expanded to the entire club, would rank the Clippers amongst the leagues best ten defensive teams.

Moving on. Early in October, Doc Rivers said he wanted Jordan to become a regular fixture on the NBA’s All-Defensive Teams. No surprise there. It’s been a subtle expectation that Jordan’s otherworldly size and athleticism would eventually translate into domineering defensive physicality and communication. Progress is a perpetually erratic creature however, and DeAndre’s has been met by missteps; seemingly, a combination of unearthly explosiveness accompanied by costly lapses in focus.

Just ten games in, it’s already apparent Jordan is displaying defensive chops that were once unknown to him. But there remains some fragmentation that prevent Jordan’s, and in turn the Clippers’, defense from erupting.

Let’s start with the good: DeAndre’s size and strength make him a daunting foe for even the most articulate one-on-one players. It’s still early but he’s giving up just 0.70 PPP (points per play) in isolation situations and 0.79 PPP on post ups, a figure that’s good for a daunting 18th in the league among qualified players. Here’s a clip of DeAndre reacting to Travis Outlaw in the corner.

Jordan closes out well here. With active hands, he gets to the spot before Outlaw can make a move. Jordan then uses his lateral speed to stay with Outlaw all the way to the cup, forcing him to throw up a fading hook; something the announcer called “a wild-looking shot.”

Here’s a clip where his immense wingspan and speed play dividends for the Clippers. In a matter of 14 seconds, Jordan neutralizes two pick-and-rolls, stymies two cuts, deflects a pass and successfully contests David Lee in the post.

Upon the initiation of the first pick-and-roll Jordan reads the play correctly, understanding that Andre Iguodala draining a three is not the immediate threat, and cuts off a passing lane for Stephen Curry, who’s heading straight to the basket as Paul trails him.

He then deters a cutting Klay Thompson into attempting to establish post position from 18 feet out. But the Warriors aren’t a one-trick pony; they’re a well-oiled machine in perpetual motion. Thompson moves away from the high block and sets up a dribble hand-off pick-and-roll with Andrew Bogut. Here, DeAndre hedges effectively, stopping Thompson in his tracks.

First, a small ode to Griffin’s improvement this season. His spry rotation to meet Bogut at the restricted line is what made the the Clippers’ success on this possession possible. After Thompson funnels the ball to Bogut, Jordan’s immediately on his way back to the rim. On his way, he intelligently feigns a double-team on Bogut and forces him to pick up the ball. He then shuffles back and uses his mammoth wingspan to deflect a pass to David Lee at the rim.

By the time Lee is in scoring position, Jordan is locked in. Lee clanks an awkward hook and, within seconds, the Clippers are off to the races. For your convenience, here’s the play in its complete motion once again:

Blessed with stunning athleticism, DeAndre is one on a minuscule list of players that are capable of sequences like this. The above play was an example of what he’s capable of when his aesthetic gifts are used in combination with defensive awareness. Problem is, when those two elements don’t intersect, the Clippers’ defense is prone to fall into fits of inconsistency.

From the same game: 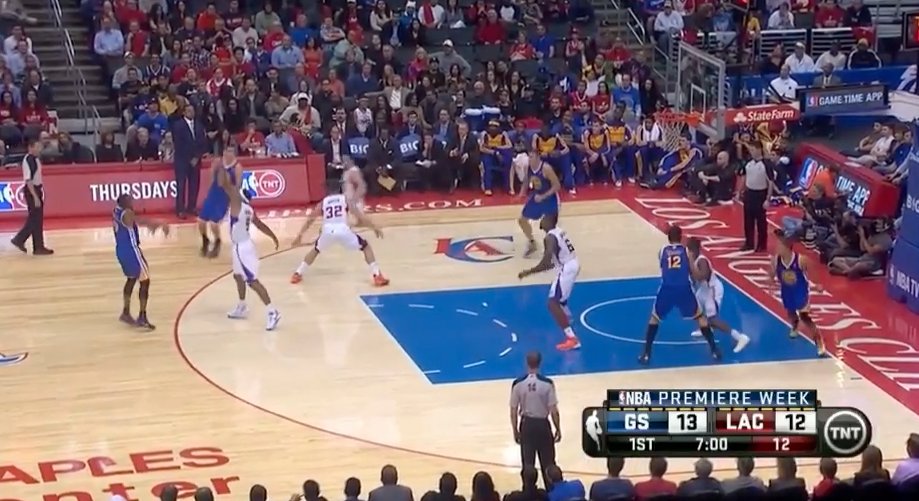 Note: Hover over the picture/icons to read an explanation of how this play went down, or click the play button to see it in all its glory.

When Griffin and Jordan played reversed roles on the defensive end (essentially, DeAndre zoning up the backside with Griffin hedging), offense came a lot easier for the Warriors. According to SportVU’s Player Tracking data, when he’s within five feet of the rim Jordan allows 4.9 made field goals at a rate of 62.0 percent — Al Jefferson is the only starting center in the league to allow a higher accuracy (Anderson Varejao is third at 61.8 percent). Griffin allows 1.4 less attempts at the rim and concedes 55.6 percent of them.

Even when he steps away from the rim though, Jordan has clearly discernible faults. As much as he’s improved his pick-and-roll coverage this season, he’s still spotty in hedge-and-recover situations and often has trouble keeping up with the NBA’s faster guards. Here’s a clip from L.A.’s second victory against the Rockets this season.

All five Clippers clamp down in transition here. A potential three from Chandler Parsons or a lob to Dwight Howard are quickly neutralized and Patrick Beverley ends up with the ball in the left corner against Paul. Paul, shrewd aficionado of all things in existence, cuts off Beverley’s baseline drive off and forces him to pick up the ball. Griffin denies Howard the ball at the rim so Beverley has to kick it out to Lin and the possession is reset at the top.

Jordan was sucked in by the Rockets’ initial play (a great example of why secondary action is so important, if there ever was one) and in turn, a few strides away from Asik when he initiated a pick-and-roll with Harden. Asik destroys Redick on the screen and Jordan’s proceeding attempt to hedge is so late that you have to wonder why he even bothered. He would have been much better suited to drop off and attempt to contain Harden at the free throw line.

Jordan offers tantalizing possibilities on both offense and defense. A share of his potential has come into fruition this season and with more time under Doc Rivers’ tutelage, we can expect an uptick in consistency. Yes, the long-standing focus issues that hampered his game last season are still present but positive change isn’t out of the cards. Adjusting to a new defensive system is inevitably a learning process so the question remains the same: Will DeAndre overcome the curve? As of yet, there’s no conclusive answer.

For now, the shaky outings persist but with decreased regularity — hopefully, a sign of good things to come. If it’s true the Clippers’ playoff hopes are invariably linked to their defensive intensity, we are presented with one certainty: Jordan’s fate, and that of the Clippers, rests on his broad, imposing shoulders.