Only a small handful NBA teams have a transcendent all-star who can elevate a team to relevance. The rest of the league makes do by finding talent where other might not, then cultivating it. The Clippers did that this summer when they signed undrafted rookie Marqus Blakely to a two-year deal. 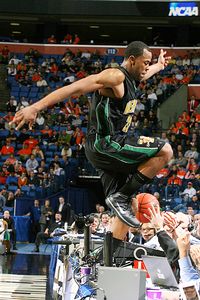 Can Marqus Blakely make the jump from undrafted rookie to NBA rotation player?

Given that roster spots are at such a premium, NBA teams don’t need much to disqualify a guy. Whether it’s his work-in-progress jump shot or his four-year status at a small-conference school on the Canadian border, Blakely was passed over. But if you asked enough scouts and basketball operations folks in Las Vegas which player at summer league was most likely to become the next Wes Matthews, Blakely was a common response.

Blakely is a member of a dying breed in the NBA — the four-year collegiate starter. For the last three seasons, he’s been the best player in the America East Conference, where he’s starred for the University of Vermont. A web search for Blakely will turn up some spectacular dunks (Blakely was the NCAA slam dunk champ), but these highlights belie Blakely’s appeal as a potential NBA player.

Blakely didn’t log a single minute in the Clippers’ opening summer league game, but when Nik Caner-Medley was sidelined with a wrist injury, Blakely found himself starting for the Clippers at one forward spot. He immediately established himself as the grown-up on the court. Blakely averaged 7.5 points, 4.8 rebounds and a couple of steals in 23.3 minutes — and shot 65.5 percent from the floor. More important, he made smart decisions on both sides of the ball.

With a slew of forwards on the roster, the Clippers might not have many minutes for Blakely in his rookie season — assuming he makes the team out of training camp. But if they’re looking to develop a defensive stopper whose athleticism and off-the-ball work make him a player who can’t be ignored on the offensive end, the Clippers won’t find many 21 year olds with a better work ethic and self-awareness than Blakely.

We had a chance to visit with Blakely as he spends the summer training in Los Angeles:

How did you end up at Vermont?
I really didn’t get a lot of looks until my junior year. I was 5-8 or 5-9 my sophomore year. Then I grew to about 6-3 during my junior year, and that’s when I started playing AAU and getting out there.

So you’re basically the best player in your conference for three years. You had a great experience there. You loved the community, but I’m also guessing that a guy with your talent at a big conference powerhouse probably gets drafted. Do you have those thoughts? Does it matter?
Not really. I mean, right now I’m in a situation where I’m in the same place as a lot of guys who got drafted. I didn’t really care. I thought, “Worst comes to worst, I go overseas, travel a little bit, play basketball.” That’s not a bad situation at all, but I’ve got an even better one now. Especially being in L.A. I’ve never really been to the west coast.

Hint: Traffic is a great time to return phone calls.
I just have to get used to it. But coming from Vermont, the weather here is great. In Vermont, six months out of the year it’s freezing. But at the same time, I could see myself having a summer house in Vermont one day. It’s nice up there.

Were you worried after you didn’t play in the first summer league game with the Clips? That’s has to be a little stressful, feeling like you can’t show what you can do?
I wasn’t really worried about it. I knew there would be an opportunity, and practices were going well.

Have you had a chance to talk with Vinny Del Negro yet?
I talked with him a lot at summer league.

Tell me about the rant after the Chicago loss. Was it as epic as it sounded?
He’s a competitor and he wants to win. He’s going to tell you what you need to do and when you’re not doing it, he’s going to let you know. We weren’t playing our best basketball out there. And after he talked to us, it definitely changed things and turned us around. We won a game. We stopped turning the ball over so much.

The Clippers clearly like you, but you still have an uphill battle. What’s Marqus Blakely’s route from training camp as an undrafted rookie with a partially-guaranteed contract to six, seven years from now being a solid rotation player in the league?
It probably starts with my defense. I’m going to get after it defensively. Offensively, I’m a better passer than a lot of people think. I rebound the ball really well. I’ve been working on my jump shot a lot out here at the training facility. But it starts with my defense. Defensively, I don’t want to compare myself to anyone else, but if I had to say who my game would be modeled after it would maybe be Bruce Bowen.

Really? Are you willing to get down in the dirt to accomplish that?
Then let’s say Tony Allen. But it’s a mindset more than anything. You have to know that in the NBA, there are so many great players like Kobe and LeBron and Dwyane Wade. They’re there to score and you’re there to take points off the board. A lot of people will look at the stat sheet and say, “Oh, well he had twentysomething points.” But I want to look at an average and hold him below it. Taking points off the board is definitely something I look at when I first step on the floor. I feel like all the rest of it is going to come easier if you play defense. Especially my game, which is much more geared toward getting out in transition and driving to the rim.

At Vermont, you guys played man and you pressed a lot, but NBA defensive systems are so different. How do you translate an America East Conference experience to guarding the kinds of guys you just mentioned?
I’m not saying that it’s going to happen this year. But I understand that defense is a system. Like Boston. They all fit the system and nobody does any more than anyone else does. On the defensive side, that’s something I can bring to the team — individual defense, but also fitting what’s going on in the system.

So you build your reputation as a defender. What happens next?
I’m efficient, which is a huge deal. I’m not sure what my career percentages were at Vermont, but I think it was more than 52, maybe —

–You never shot below 54 percent and were up in the 60s your junior year. Don’t sell yourself short. That said, what are your limitations right now?
I have to work on my jump shot, but that’s what I’ve been doing every day out here and getting better at. But once you understand the system, you can find other ways to be effective. You don’t have shoot every time you touch the ball. You don’t have to prove something that you can do something you can’t. Know what you can do and do it to the best of your abilities and be that much better at doing it than someone else. A lot of that comes with seeing the floor and reading defenses. I think I do that well. And I think that’s how I get there.


Cramming code into the sports world - deep inside a defunct power plant...