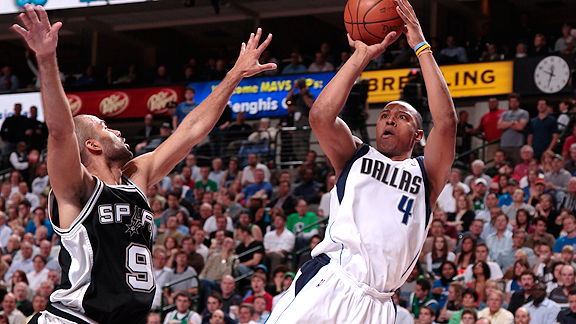 At the beginning, this had all the looks of a courtesy meeting, not unlike what the Clippers did with Tracy McGrady last year. Kick the tires and make sure Caron Butler’s knee surgery hasn’t turned him into a monster leaper somehow (think the basketball version of the kids movie “Rookie of the Year“) who will play for the league minimum out of the kindness of his heart before moving on elsewhere. That’s all this really seemed to be. Due diligence and whatnot.

But late last night, some interesting news came from Ramona Shelburne of ESPNLA.com:

A second meeting seems to rule out the line of thinking that this was mostly for show. Guys like Olshey pay “favors” to agents all the time, but entering talks again isn’t necessary to help make Butler desirable or to make nice with Butler’s agent Raymond Brothers, who also represents small forward incumbent Al-Farouq Aminu. No — the Clippers are genuinely interested in Butler, and the feelings appear to be mutual.

It’s surprising — and not in the cool way where we get excited about a “big name” considering signing with the Clippers. It’s surprising because Butler may literally be the worst free agent small forward fit for the Clippers this side of Al Thornton.

This isn’t an attack on Caron Butler. I’ve long admired Butler’s gritty, aggressive style of play, his undeniable love for destroying straws with his teeth, and his “Tuff Juice” nickname. In a vacuum, I actually like Butler as a player.

But for the Clippers, he makes absolutely no sense. Here’s why:

Usage: Here’s the biggest problem with Butler — he’s a high usage scorer. Butler’s career usage rate (the percentage of offensive possessions used by a player during his time on the floor) is 22.7 percent. Last year in an injury-shortened season on a championship Dallas Mavericks team, it was at 25.1 percent. That ranked him 7th in the NBA for small forwards, ahead of guys like Paul Pierce and Rudy Gay. Short version: Caron Butler uses a lot of possessions.

Let’s go back to last year. Starting small forward Ryan Gomes had a usage rate 12.74 — second to last in the league of any small forward who played over 20 minutes a game. Butler literally used double the amount of possessions Gomes used last year.

With Chris Kaman coming back healthy and demanding a big chunk of the looks (he hasn’t passed up an open 15-footer since, oh, 2005), and Gordon and Griffin demanding more possessions if anything, where are all these shots for Butler supposed to generate from? Who loses all those possessions?

If Butler joined the Clippers, it would almost be a certainty that he would see the ball much, much less than he did in Dallas, where he played in a system (and with a point guard) that could utilize him well with off the ball movement. If last year is any indication on how Del Negro uses his small forwards, Butler would be assigned to the corner to watch the action most times down the floor.

What happens when you take a third scorer on a championship team and drastically reduce his scoring opportunities on a 32-win team? Go to your local pickup game. Identify one of the best scorers, then ice him out for a game or two. Relentlessly feed everyone else and never give him the ball. Then, after a little bit of that, give him the ball. I guarantee puts a shot up. I also guarantee some whining and some bad defense along the way. Scorers by their very nature are like addicts — you can’t help them beat their addiction unless they want to change.

Shooting: Let’s say, despite all that, you’re sold on Butler as the scorer the Clippers need. 16 points a game at 44 percent shooting is nice. He’s got a nice mid-range game and can slash. Okay. I’m with you.

But if the priority is placing shooters around Gordon and Griffin — and unless something has changed, it is — then why add Butler? Prior to what can probably be labeled as a statistical outlier (43 percent in 29 games last year), Caron Butler was a 31 percent career 3-point shooter. On his career, he’s attempted less than two three-pointers a game. He’s not a deep threat or a spot-up shooter by any means, and he doesn’t really stretch the floor because all of his damage is done in iso situations, off his own jab steps. If you want to chase good 3-point shooting numbers in a small sample size, Al-Farouq Aminu’s start to last year works just as well.

Injuries: Talk about testing the basketball gods. Caron Butler is 31 years old, fresh off a season-ending knee injury and surgery, and has never once in his 9-year NBA career played an entire season.

Contract: We’re not sure how much Butler is demanding, but we do know he wants a multi-year deal. A league source told ESPNChicago.com’s Nick Friedell that Butler is not interested in a one-year contract, which is what Dallas wants him back at. It’s highly unlikely the Clippers could convince any of the big available names to take a one-year deal, but Butler will probably be among the most expensive options at small forward. The reality of Butler’s situation is that you’ll likely have to pay an injury-prone scorer 7 million dollars a year at the age of 34.

Remember, that decline is all pre-knee surgery.

As weird as it is to live in a world where the Clippers have free agents lining up at the door to play for them, that’s where we’re at. For the first time in a long time, the Clippers have the benefit of being selective. Caron Butler is a good basketball player — a solid rebounder and tough defender — but he is not the veteran with championship experience Olshey previously stated he wanted. He’s not a shooter to spread the floor. He’s not “Al-Farouq Aminu in 3 years.”

Who is Caron Butler? For the Clippers, he’s a square peg in a round hole.