“It’s pretty disheartening the Clippers played so poorly this game. They were completely unprepared for the intensity of the playoffs,” I said as the fourth quarter began. “Oh look, and now they’re going on the patented ‘too-little-too-late’ run to make the final score look respectable.”

After the third quarter, I had mistakenly picked up the phone call of a friend and Los Angeles denizen, but “the other” Los Angeles. “Maybe I was totally off. I thought Memphis would be a better matchup than Denver. I’m not sure if they can recover after this game. Nick Young just cut it to 6. At least the Clippers will scare the bejesus out of Memphis this game. Although, I don’t know if it’s a good thing because now the Grizzlies won’t ease up next game and… holy crap. Young just cut it to 3. I’m hanging up.”

And you know how that night ended:

It was a clear, magical night that reintroduced the Clippers to the playoffs. And then 14 days later, after a couple of missteps, they cemented that historic comeback as more than just a fluke. More than a freak occurrence attributed to Memphis taking their foot off the pedal. Game 1 suggested to the Clippers that anything could happen. Game 7 affirmed that anything was possible. Then, Los Angeles was unceremoniously ousted by broom in the next round by San Antonio.

There is little doubt the Spurs were the better team. Their experience and depth were more than the Clippers could handle. But that didn’t keep the Clippers from hanging in there. (John Cherwa, Los Angeles Times)

[San Antonio’s] experience and depth were more than the Clippers could handle. Los Angeles took a long look in the mirror. They came away victorious in Round 1, a gladiator’s match, a battle that required heart and moxie and gumption and other words that hark back to blue collar grit. The Clippers had that in spades, despite the glitzy highlights and catchy nickname. So they set about to correct what they lacked, what the Spurs had made so humiliatingly obvious in their matchup: they weren’t the cowardly Lion, they definitely weren’t the heartless Tin Man, the Clippers were the Scarecrow. 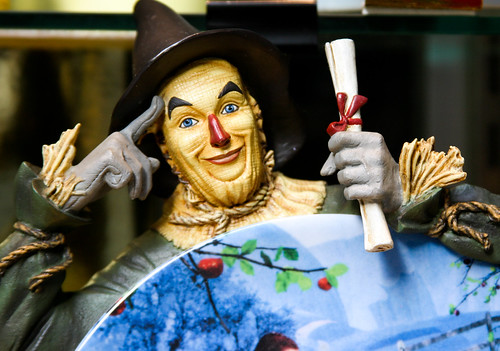 You’d think a team with arguably the smartest player in the league (Chris Paul) and one most GM’s think would make the best head coach (Chauncey Billups) would want not for brains, but that’s essentially what the Spurs exposed. Los Angeles was filled with talented one tool players: they could rebound (Reggie Evans) or defend one-on-one (Kenyon Martin). They could shoot (Mo Williams and Randy Foye), but the Spurs demanded they do more and laughed when they couldn’t. Many of the Clippers’ players said it was like playing checkers in a game of chess. After the Grizzlies series, it was more like trying to solve a Millennium Math Problem after a bear fight.

Los Angeles thanked their lunchpail, hardhat crew and blew up their bench. In came ball handling extraordinaire Jamal Crawford, home came the prodigal Lamar Odom. Validation of the Clippers hard work came with Grant Hill. He was the quintessential player that detractors had declared the team lacked: highly intellectual, basketball savvy and skills that could back up those claims. Coupled with the fact that Hill is not long for the league and still desires a championship, his signing was an implicit declaration that the Clippers could be contenders.

As exciting as those additions may sound, though, none of the Clippers’ moves this offseason amounts to anything that truly improves the team’s chances of contending this year or in the long-term. Long accustomed to losing the old-fashioned way through brazen disinterest, the Clippers made many mistakes typical of a newly respectable organization. Like the nouveau riche buying a gallery full of gaudy modern art simply because the artist is famous, the Clippers snatched up almost every available player they once saw on a Slam magazine cover. (Ben Watanabe, NESN)

And now they embark on a season with likely the greatest Clippers team ever assembled in franchise history. A team who, once Chauncey Billups returns, will feature the same players in the starting lineup for consecutive seasons in nearly 20 years for the Clippers. A bench of Eric Bledsoe, Crawford, Matt Barnes, Hill and Odom (not even mentioning Ryan Hollins and Ronny Turiaf) speaks to how that San Antonio series was imprinted in the thought processes of the organization: every new face a multi-tool player, a bench teeming with versatility and playmaking from every position. But a piece of paper from a wizard doesn’t affirm the Clippers’ newfound intellect, only the result of the season will do that.

I’m comfortably under at 45 wins. You could even talk me into going lower. I don’t like what they did this summer. I think they have too many guys. They do not have the right coach to juggle that many guys… I don’t have a good feeling about this Clippers season. I think it’s going to be, I would use the word: unhappy. (Bill Simmons, Grantland)

For the first time in seven years and the second time in approximately 7,000, Clippers fans are not bemoaning a cost-cutting offseason. They’re not scouring the Internet for the latest hoops mixtapes of lottery talents like Shabazz Muhammad or Nerlens Noel, pinning their future hopes to players only terrible teams have the right to draft.

The Clippers are bound for the playoffs. And not just “put on a good show” or “make some noise in the playoffs.” Expectations vary in the public sphere, but around the league the Clippers are expected to contend. The very broom-wielding Spurs that scoffed at Los Angeles’ ability to use the ball in the game played with baskets were more than complimentary of them at Media Day.

And so the 2012-13 NBA campaign is about to commence. The Clippers dream of a postseason trophy, not a number string tied to a series of ping-pong balls. Blake Griffin sets out to prove he’s still a developing player. A player whose trajectory does not end over a car, through Kendrick Perkins, at the top spot of SportsCenter’s Top Plays, but as the best power forward in the league, as a feared two-way player, as someone destined for the Hall of Fame.

Chris Paul embarks on a trail no one even knew existed: the path to bringing Los Angeles not its 17th title, but a first championship; a Larry O’Brien trophy bathed in white, red and blue. Not just bringing notice to a downtrodden franchise, but credibility to an organization trying to turn a ship mired in doubters; people that will wait to see to believe, and then wait for verification before accepting what they see. The Clippers enter a season where the potential outcomes are near limitless. There is no ceiling on the hopes and dreams of fans and players. There is no floor on the possibilities of disappointment. And as the season opener nears, the only thing we know is that anything could happen. Anything could happen. Anything could happen. Enjoy the season.