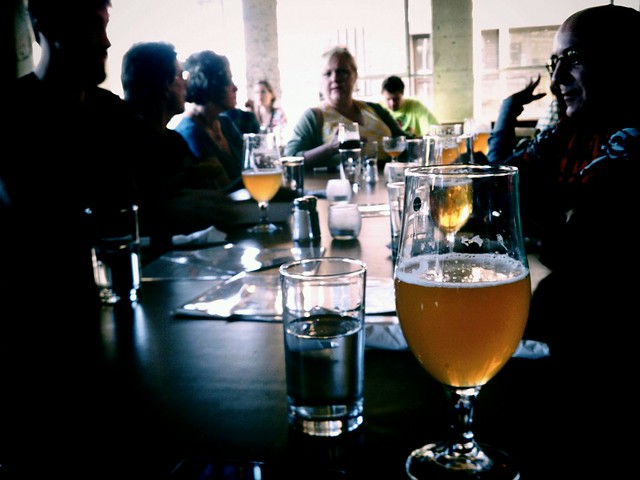 Before each home game this season, ClipperBlog will run “ClipperBlog Eats,” a restaurant recommendation from its resident restaurant reviewer, Ben Mesirow. Below is today’s suggestion:

Gastropubs in LA come in all shapes and sizes, cocktail-oriented and English-themed, sports heavy and steampunk-chic, but Little Bear alone has more or less cornered one region of the pub world – Belgium.

What exactly makes it Belgian, you ask? The beer list, mostly, which features an impeccably curated and constantly evolving selection of Belgian and Belgian-style beers, from bright, peppery saisons and sweet plum jam quads to obscure funky wild yeast beers from the likes of Evil Twin and Crooked Stave, which taste like dust collected from cobwebs in the attic of a Flemish barn. The bottle selection is expansive as well, highlighted by a wide array of outstanding sour beers, including multiple beers from legendary Belgian brewery Drie Fonteinen and outstanding Oregonian sour brewery Cascade.

It’s true that the menu is not so Belgian on its own, though that may actually be to their benefit. They do serve carbonnade and frites and there are waffles for dessert, but don’t feel handcuffed to thematically appropriate food items – everything is good and almost all of it goes well with beer, from the short rib grilled cheese and curry chicken sandwich to the witbier braised pork belly.

And beyond the food and drink, Little Bear is a place that feels Belgian – a big, high-ceilinged industrial space that is most conducive to an unhurried meal, where elegantly curved glasses of beautiful beers in all sorts of colors sit on every table, where you spend as much time savoring your beer as your sandwich, where the second hand glides gracefully instead of its usual clumsy lurch and you could almost forget the struggles of the Brooklyn organization and the Clipper bench, at least until the end of the first quarter. 1855 Industrial Street, Los Angeles, CA 90021; littlebearla.com