We’re back! 2015-16 Clippers basketball begins Wednesday night in Sacramento. As always we’ll be breaking down each game with a little 3-on-3.

Last time they met?
March 18, 2015 — The Clippers won 116-105 in California’s capital, staving off a furious Sacramento Kings comeback thanks to Hedo Turkoglu, who started at small forward (!) and wound back the clock, dialing in 19 points on 5-10 shooting from deep.

What’s changed since then?
A lot. Personnel-wise, just half of the Clippers who played in that game are back in the red, white and blue this season. The aforementioned Turk is gone as is Dahntay Jones, Spencer Hawes, Glen Davis and Nate Robinson (thanks for your service, fellas). For the Kings, it’s another year and another new point with Rajon Rondo arriving to steady (?) the ship. After maybe, almost, sort of, not trading DeMarcus Cousins in the offseason, George Karl gets his first full season at the helm and is ready to leave his mark on the regular season. Disfunction still reigns King in Sacramento but there’s hope that this is the year the franchise turns the corner.

Remember me?
Two former ex-Clippers will take the court Wednesday; Darren Collison, who returns to his most effective role as a back-up point guard behind Rajon Rondo, and new King, Caron Butler, who’s 2015-16 season doubles as his book-tour. 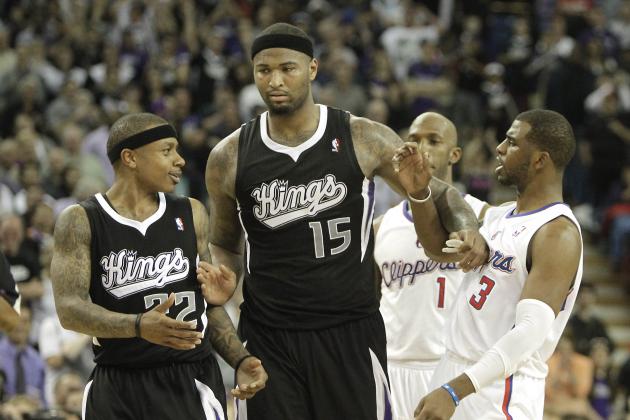 1.It’s the first game of 82, what do you hope to learn about these Clippers from Game 1?
J.D. Evans: Not much. The starting lineup has great continuity, so we won’t learn anything there; the bench is completely new, and we won’t learn anything about the rotation from one game. Perhaps we’ll get to see if DJ has new moves on offense. That would be nice.

Luke Laubhan, (@lukelaubhan): I’m looking forward to learning the following: When the rubber meets the road, will CP and DJ get along? Who gets an assist first: Jamal, Lance, or Austin? What does the backup front court look like? How many times will the arena DJ drop Hotline Bling? I hope a lot. Can’t wait.

Roscoe Whalan, (@RoscoeWhalan7): All the real questions about this team won’t come until April or May but, in the first instance, I’m looking to see who ends up running with the carry-over starters from last season. Doc has toyed with us all summer about whether it’s going to be Paul, Lance or Wesley. After the past couple of preseason games it looks like it’ll be Born Ready.

2.Who was the Clippers biggest addition this summer and why?
Evans: Maybe I’m just being willfully contrary, but: Wesley Johnson. Johnson can, in theory, fill Barnes’ role in the starting line-up, including defense. If he does, that should still be one of the best units in the association, and more importantly, would let Pierce/Smith/Stephenson/Crawford + 1 feast on backups.

Laubhan: Paul Pierce. The dude is an L.A. native, a basketball demigod who’s seen it all, done it all, and has the locker room credibility to say what’s what. With his crunch-time courage and back-breaking 3s, Pierce can settle the team if things get weird in the playoffs again.

Whalan: Josh Smith. As the old saying goes, “If you can’t beat them, sign their players in the offseason” and the Clippers did just that at a bargain basement price. Smith is the best third big this Clippers squad has had since the Kenyon Martin days. Yikes. Sure, he comes with baggage and shoots free throws as bad, if not worse than DJ, but his versatility will help this squad a lot.

3. Boom or Bust: Rajon Rondo in Sacramento.
Evans: It depends what you expect. If you’re thinking mid-Celtics-career Rondo, obviously bust; Boogie and Rudy are neither Truth nor Ticket, and it’s never a good thing if you’re thinking “can my unstoppable center provide spacing for my point guard?” On the other hand, if he can help them on defense and otherwise stay out of the way, he might be an upgrade over Collison. Maybe.

Laubhan: We’re going to get the same Rondo the league has seen for the last few years. Genius-level assists, one or two highlight reel plays per game, some frustrating off-kilter pseudo All-Star behavior, and veteran presence that vacillates between great and grumpy. If I’m a Kings fan, I’ll take it.

Whalan: Boom — but not in the good way. Like, as in, BOOM! and the whole team implodes. Rondo hasn’t done enough to get the benefit of the doubt yet and the combination of rocky ownership, a volatile DMC and George Karl’s already tenuous relationship with seemingly all parties make this a powder keg waiting to go off.