Last time they met?
November 29, 2014 — The Clippers capped off a 7-game road trip with a 16-point win against the Jazz. Blake Griffin paced the team with 28 points and Jamal Crawford chipped in with 22 off of the bench.

What’s the trend?
The Jazz are looking to snap a two-game losing streak as they head into tonight’s game against the Clippers. LA knows that feeling as they finally re-entered the winners circle on Tuesday night with a win over the Denver Nuggets in Colorado. 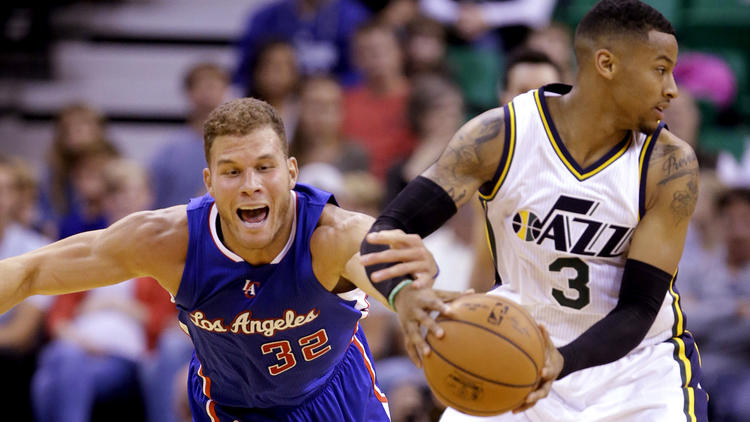 1. In a world of point guards, the Jazz have been rocking some less conventional line-ups. Has it worked?
Andy Larsen, Salt City Hoops (@andyblarsen): For the most part, yes! The Jazz’s lineups without a point guard have been about a +3.2 NetRtg — good, if not brilliant. Those lineups, known as the “Wing-T” by Quin Snyder, have been really effective when Rudy Gobert and Derrick Favors are also on the court, +25 NetRtg so far.

Aaron Williams (@aaronsmarter): I won’t claim to be any kind of an expert on Utah’s games so far; they haven’t played many national contests to date, and I can’t get either of the resident cable-payers in my family to spring for any League Pass package so far. However, looking at win-loss (3-5), point differential (+0.8), and the stats of the “Wing-T” lineups that they’ve run out so far, I’d have to say… “Meh.” I don’t say that to detract from what they’ve been able to do without their starting Australian point guard, Dante Exum, because what else can they be expected to try when their only other option is yet another in a succession of rookie floor generals (more like sargeants)? Hayward-Hood-Burks “works” in the sense that the offense doesn’t instantly become a five-alarm dumpster fire when they roll the ball out, but point-guard-by-committee has always been an iffy proposition in the first place (as seen by the very rare occasions the Clippers have had to try it in the past 5 seasons). But the Jazz’s real problem is on defense, which I hope is something they wait ’til after today to figure out.

Roscoe Whalan (@RoscoeWhalan7): Bigger is better in Utah. The line-ups including Gobert and Favors in the front court with Gordon Hayward, Alec Burks and Rodney Hood on the wings have been revolutionary if only because of a product of necessity with Dante Exum injured and Trey Burke finding his way coming off the bench. So, yes, it’s worked with some degree of success. However, I don’t anticipate the trend to catch on exactly.

2. Who’s your preferred rim protector: Rudy Gobert or DeAndre Jordan?
Larsen: Rudy Gobert, by a small but significant amount. Gobert, according to rim protector stats kept by Nylon Calculus, saves an estimated 9.52 points per game on the back of his rim-protecting prowess. DeAndre Jordan: 5.35 PPG. Beyond that, it’s tough: DAJ’s a better finisher, defensive rebounder, and turns the ball over less, but Gobert shoots free throws better, offensive boards more effectively, and passes and steals the ball more effectively.

Williams: Don’t make me do this. I’m such a homer, my first instinct is — of course — to say, nay, sing from the mountaintops (right next to the Hollywood sign) “DeAndre Jordaaaaaan!” But, alas, DJ, for all his physical gifts and prowess at averting the occasional wayward shot attempt that wanders into his vicinity, he still has not earned himself a nifty nickname like “The Stifle Tower”. DJ very narrowly edges Rudy in certain statistical categories as well, notably in blocks per game at 2.8 to 2.7, and rebounds per game at 13 to 10. But I think therein lies the rub; opponents feel much more comfortable shooting the ball against the Clippers than the Jazz. A lot of that is down to Los Angeles’ gourmet dairy wing defense, but many of those shots are right at the rim as DeAndre rotates to cover one of those wily wings after a quick switch. Meanwhile, Gobert is as stationary as his sobriquet (it’s French, you see), which scares many opponents from even looking at the lane as a viable option. I’m sure one day we’ll have a stat for that; I hope so, because it’ll make questions like this less stressful in terms of research.

Whalan: I’ll take Gobert. All the numbers suggest he’s a better defender and he looks it on the court as well. Also, he’s not having a post-max-contract chill like DJ and after those 13 free throws clanged off the rim last night in Denver… Gob-Gob’s 62.5% from the stripe seems heavenly.

3. What’s your 14-game prognosis on Paul Pierce and his fight against Father Time?
Larsen: He’s probably not this bad, and it’s worth noting that he shot under 40 percent for the Wizards last November too. But the usage drop seems real, and it’s hard to see him as much more than a three-point shooter for the Clippers moving forward. Hopefully he starts hitting them at a better rate.

Williams: Look, man… Father time is undefeated for a reason, and if anyone really needs stats or figures or concrete examples to verify that simple fact, you can just show them the game footage of either Paul Pierce or Kobe Bryant. While I don’t doubt that there is still a little of the clutch gene within The Truth, I’d much prefer it to be held in reserve and rationed  very carefully until the Clippers need to unbottle the magic in the playoffs. Otherwise, it’s just too painful to watch Inglewood’s favorite son creaking up and down the court like the Tin Man, searching for the oil can to grease those old joints into something resembling a professional basketball player. Right now, Pierce looks a lot like the old head at the local 24: he’ll give you buckets at open run, youngblood, but until cherry-picking becomes acceptable practice in organized competition, maybe he’d better stick to the exercise bike.

Whalan: Tim Duncan is waging the most intense war on Father Time we perhaps have ever seen. On the flanks, the same cannot be said for the battles involving Paul Pierce and Kobe Bryant. Neither are winning — merely delaying the inevitable. Their gallant struggle is soon to come to an end. Pierce’s form comes as no surprise. We all knew the Paul Pierce that would be walking through the door. He was brutal in part of last season’s campaign with the Wizards. Ideally, Doc would freeze Pierce for the next few months and pray that when he busts him out in the postseason that his clutch gene is still in tact.