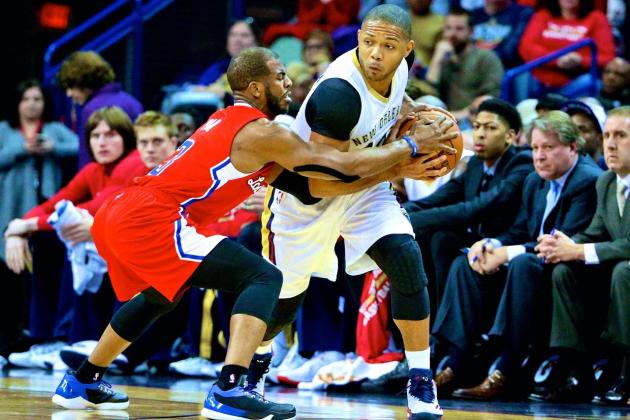 1. What on earth is wrong with the Clippers?
Kaveh Jam (@kavehsroom): There’s a few ways to look at this. From an effort/execution standpoint they are routinely outworked. And despite the luxury of employing the second leading rebounder in the NBA in DeAndre Jordan, they are a terrible rebounding team. The Clippers had one glaring deficiency last season in bench depth. A lack of support from the second unit put crazy pressure on the starters to keep them in games. The roster adjustments over the summer to plug this hole has so far yielded nothing: Through 15 games, the bench ranks 22nd in points and 30th in rebounding.

Ben Mesirow (@Semneb): I wish I could say exactly what’s wrong, but when you start listing the Clippers’ issues things get heavy fast. The 3s aren’t falling, they’ve been banged up, the chemistry has been a little off, they don’t have a backup point guard, the bench units are limited in punch and creativity and defense, there’s still that pesky wing defender issue… and the list goes on.  I don’t pretend to have all (or any) of the answers, but I would love to see more aggressive staggering of the starting 5 – maybe CP paired with DJ for playmaking and defense, and Blake paired with JJ to run dribble handoffs and unleash Point Blake. Or maybe this is just an early-season funk and everything will be better next week.

Roscoe Whalan (@RoscoeWhalan7): I could rattle off a laundry list of things here from rebounding to the second unit’s failure to launch but really it comes down to effort. The Clippers are playing like a team that is so bummed that they have to go through the motions of another 82 game season to get back to the playoffs again. It’s the entitlement tag that the team has tried to shake for so long.

2. How far apart are Anthony Davis and Blake Griffin?
Jam: They’re closer than you might think. I’m not about to claim Griffin is better than Davis because I don’t think Blake will ever be anything close to the defensive presence Davis is. But Griffin has started the year blazing and as we speak, he actually has a higher PER than Davis. I expect that to change in favor of Davis as the season progresses and the Pelican’s start to get healthy. Davis is a really unique player and it’s unfair to compare anyone to him but Blake deserves some acknowledgement for the crazy strides he’s made.

Mesirow: Well, let’s see – assuming they’ve got their arms out, AD’s wingspan is about 7’4, and Blake’s is something like 6’11, so take half of those and add them together… they’re probably about 7 feet and an inch or so apart? Ok fine that’s a silly interpretation, but it’s largely AD’s length that sets him apart – Blake has been spectacular and has raised his game again this season, but because Davis is a little taller, a lot longer, a couple years younger and similarly skilled and motivated, his potential is essentially unlimited. Griffin will never be the kind of defender and two-way force that Davis can be. But if you’re picking one to win a single game tonight, then Blake’s playmaking, hot shooting, and recent aggressive mentality are tough to beat.

Whalan: Look, if we’re “starting a franchise tomorrow” the answer is simple — Anthony Davis is the man. However, Blake’s reputation seems to be entering its third era: as a rookie he was a fan-favorite for his repertoire of dunks and hilarious commercials, then became hated for his sulkiness. Now, he has refined himself to be one of, if not the most talented big man in the game and the pitchforks (save for Charles Barkley’s) seem to have been put away. Davis is going through his hype-phase now and his team is having a disappointing year — maybe he’ll suffer a similar fate?

3. True or false: Alvin Gentry is a hell of an assistant coach and just a so-so head coach.
Jam: Gentry’s a hell of a coach, period. That’s a skewed and unfair comparison without the added context of the players at his disposal. In Phoenix and Golden State, he had the horses to unleash the perfect style. There’s no coach in history who could steer a New Orleans team that outside of Davis, is as close as you can get to a D-League starting five. There’s too many injuries and factors that have little-to-nothing to do with coaching ability.

Mesirow: I’m not sure I’m ready to mete out the harsh justice of a ‘true’ verdict quite yet, but the record doesn’t look great – his teams have finished over .500 just three times in 12 seasons (including partials) thus far. There’s no denying, though, his success as an assistant, and this season’s Pelicans have been hit by some pretty rough injury luck, so I think it’s still a bit too early to count them – or their coach – totally out.

Whalan: Hell of a coach. Did wonders as an assistant in both LA and Golden State. However, some of the Warriors credit may need to be tempered as Luke Walton has shown that even Vinny Del Negro could take the keys to that car and still drive it with ease. It’s not Gentry’s fault that his Pelicans have been ravaged by injuries and until he gets the chance to run his full squad, I’m reserving condemnation.