What’s changed since then?
The Pacers have got Paul George back, so, that certainly helps. Perhaps surprisingly, the Pacers are now second in the East and look set to be LeBron’s toughest test once again. All that even after shipping out Roy Hibbert and David West leaving for the Spurs. Indiana is back. Meanwhile, the Clippers, winners of three straight, will be looking to adapt to life without Chris Paul who went down in Monday night’s win against Portland. 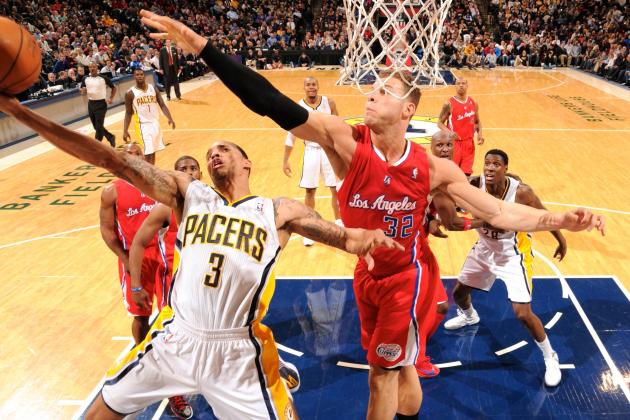 1. How much does CP3’s injury hurt the Clippers?
Aaron Williams, (@aaronsmarter): It’s weird. I think that in the short term, Chris going down can have all kinds of negative effects, but on the other hand, this team is experiencing a resurgence powered primarily by the reappearance of Lance the playmaker. With Crawford finally playing something resembling NBA again, Baby Rivers’ confidence skyrocketing, and Griffin’s usual dominance they may be able to cobble together enough offense to win over a short stretch. However, there are potential long term benefits if they don’t drop too many games, in that Chris will be forced to rest all those other nagging injuries he would normally play through. Come June, we may be revisiting this moment as a blessing in disguise.

Kaveh Jam (@kavehsroom): It hurts them because it was just starting to look like they were gaining some traction. Even before the injury, Paul hasn’t looked completely right this season by his lofty standards. Things won’t get any easier if he’s in and out of the lineup this season as it will severely hinder the team’s chances of building some chemistry and gaining momentum.

Roscoe Whalan (@RoscoeWhalan7): A sizable amount. CP3 obviously is the straw that stirs the drink and things were just starting to look like they were improving in Clipper Land. However, as Aaron suggests, if the injury rules Paul out for just a few weeks and not a few months then the Clippers should be able to weather the storm and perhaps simultaneously get some of the other guys going — namely Rivers and Stephenson.

2. Paul George or Blake Griffin?
Williams: Man, look. Don’t ask the homer these questions. There aren’t going to be too many times you see me bet against this team after twenty years – or at least the last five. That takes absolutely nothing away from George; if anything it’s a high compliment that I have to provide the disclaimer. The difference is in utility. There will be certain plays where the Clippers simply cannot get anything on offense. It’s in those situations that you can just toss the ball into the post, and into the hands of the most unstoppable player (not nicknamed Boogie) in the league. PG is incredible on those nights he’s feeling it, such as the Pacers recent demolishing of the Wizards, and he can score in bunches from the wing. But the Flying Lion is more reliable, durable, and versatile. All he needs is a three pointer, and we see that being added to his game right before our eyes. Scary.

Jam: It’s obviously difficult and somewhat counter-intuitive to compare different players at different positions. Each are truly elite players but in completely different ways. George’s recovery from a gruesome leg injury is really amazing. His game is arguably at a higher level right now then prior to injury, which is a huge reason the Indiana Pacers have been an early season surprise. While George does most of his damage as a slashing wing player with unlimited range on the perimeter, Blake can now devastate opponents from inside out to about 15 feet — something he lacked earlier in his career.

Whalan: This one is really tough. Two different guys with different ways of impacting a game and both are Top 10 NBA players in their own right. George is currently in the forefront of the casual NBA fan’s mind because he’s reminding everyone what we missed out on last year when he was injured — and in many ways looks better than he did pre-injury, which is crazy. On the other hand, Griffin seems oft-forgotten because he doesn’t dunk over Kia’s mid-game anymore but he is such a strong, physical brute down low that he can bulldoze his way to the basket against almost anyone — that strength can never be taught. It’s a close call but, never trust a guy with two first names — Blake gets the nod.

3. Complete this sentence: ‘When an opposing team starts hacking Deandre Jordan…’
Williams: …pop some popcorn? I addressed this in the post postmortems for the Blazers game Monday night, but allow me to add that as torturous as it is to have to sit through, it’s also usually a great sign. It’s a rival coach more or less admitting defeat, that he doesn’t know how else to put the brakes on whichever flavor of whipping the Ships are applying in any given game. It demoralizes the other team’s players, it mucks up their offense, and most importantly, it almost never works. It’s a last-ditch, scorched-earth tactic that usually hands the Clippers the ballgame as long as Doc doesn’t flinch with his best rim protector in the game. It usually means this one’s a formality, and I’ll always be satisfied, if not necessarily overjoyed when this sort of skulduggery is employed.

Jam: …take him out. It’s ultimately going to kill you on both ends of the floor because it throws the entire rhythm of the game into a funk. Not only are you gambling away points on DJ’s free throw shooting, but the lack of flow to the game can stunt the defense as well. Unless he begins to make a decent percentage where by keeping him in outweighs sacrificing your own team’s rhythm.