Last time they met?
May 2, 2015 — Remember this? Chris Paul, time expiring, an awkward jumper off the glass over Tim Duncan, clinching victory and the series, 111-109.

What’s changed since then?
Both teams have retooled. The Clippers added a bunch of newbies including Paul Pierce, Josh Smith and Lance Stephenson in a series of moves that were supposed to bolster the bench. While that hasn’t been super successful the Spurs’ juggernaut new additions have made San Antonio even  stronger with the additions of both LaMarcus Aldridge and David West.

Kawhi
So the defensive beast is now pretty impressive on offense too. He leads the team at 21 points per game and is shooting nearly 50% from deep. Oh, he also is averaging 7.4 rebounds, 2.7 assists, 2.1 steals and 1 block per contest. Beast. 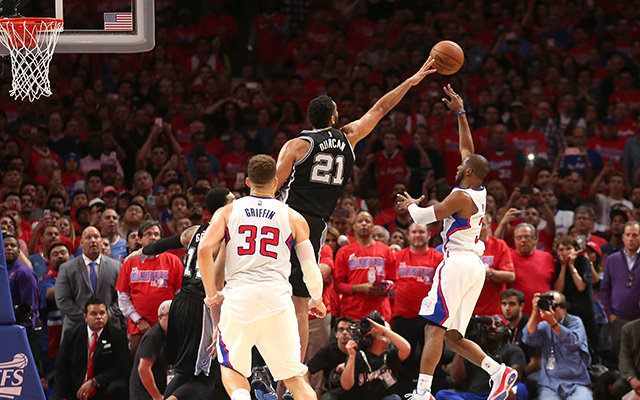 1. Since these two teams met in the Playoffs last year there are a lot of new faces on both teams — how have the Spurs transitioned so seamlessly?
Matthew Tynan, 48 Minutes of Hell, (@Matthew_Tynan): This answer gets old, but it’s because of the culture they’ve established over the last 18 years. The new faces have bought in thus far, and they’ve gone back to a style that fits them best — lock down on defense, maintain the pace they like to play, rebound and eliminate chaos. Of course, Kawhi’s continued growth into a superstar hasn’t hurt in the slightest.

Kaveh Jam (@kavehsroom): By doing the same thing they’ve been doing for over a decade now: collectively active on offense, timely rotations on defense. The faces change, the process and execution rarely do. Everything is systematic and predicated on unison and collective development. They are the master at the fundamentals and that always stands the test of time.

Brandon Tomyoy (@dingyu): There’s absolutely a level of consistency with the Spurs that is unrivaled in the league, and that goes all the way to the top of the organization. That means that players joining the organization are also considered as strong culture fits even before joining the team. All that together helps the bottom line of wins and losses. Doc Rivers will be one of the first in the Clippers organization to admit they look up at what the Spurs do, and that’s not to take away from how far LAC has come in their own regard. But they’re also a team that is trying to incorporate a brand new defensive scheme in addition to incorporating the players themselves, so really, everyone on the roster is on a learning curve at this point.

2. Having said that, is the fact that the Spurs are just four games back on the Warriors the most Spursian thing ever?
Tynan: The most Spursian thing about it — until recently, at least — is the way they’ve stayed under the radar. But that was to be expected. Offense will always attract more eyeballs than defense, and what the Warriors are doing is spectacular. But the way they treaded water until things started clicking? Yeah, that’s pretty damn Spursy, because here they are again.

Jam: It’s the craziest part of the Warriors run that very few people are noticing. Which is exactly the Spurs way. Do a little research and the reasons are too obvious: the defense is as good as it has ever been (even by San Antonio standards), and their point differential is just 1.2 less than Golden State’s has been.

Tomyoy: If anything, not caring as much as the rest of us that they’re just four games back of the Warriors is probably the most Spursian thing ever. They know what they do produces winning basketball, and that means they don’t concern themselves with looking at the standings. Spurs gonna Spurs.

3. What about the Clippers — Are they finally starting to make things click?
Tynan: I’m not really sure. They’ve obviously been better of late, but only two of their last 10 wins have come against teams with winning records. Then you’ve got ugly games like the one in Chicago, but Blake was ejected…so what did we learn? Sometimes an easy schedule is a great way to get things in gear, though, and tonight’s game will provide a nice measurement for where the Clippers stand.

Jam: It definitely looks like it. The value of outside shooting can’t be overstated for the Clippers. They have yet to lose a game in December in which J.J. Redick shoot’s over 45 percent from the field. His ability to stretch a defense change’s the entire dynamic of the offense.

Tomyoy: It helps that the strength of their schedule has eased up a bit, and that the team has had more time to come together. The benefit of time truly cannot be understated when there are so many new moving parts on a team, whether it be trying to incorporate a new starting small forward, 8 new players on a roster, or a new defense. I don’t think they’re all the way there yet, but they’re at least starting to look the part.