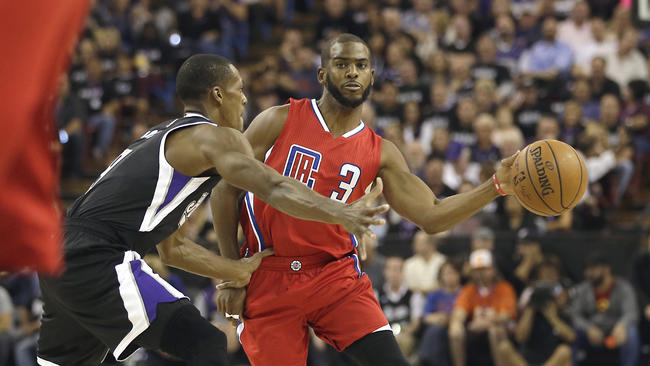 1. Who’s blowing your mind more right now: Cole Aldrich or Pablo Prigioni?
Aaron Williams (@aaronsmarter): PaCo is my favorite thing about this team. That two underdog, end-of-bench players could rise in the rotation, going from forgotten also-rans to the machinery that moves the second unit’s offense, is the Clippers’ entire existence. I think they’re hand-in-hand; you can’t have one without the other. They showed the bench unit how to play together; more than that, they showed that for all the flashy athleticism Doc brought in on the offseason, sometimes it boils down to doing one or two things really well. That’s what they do. They are the Wonder Twins of this roster, so I can’t split them up.

Kaveh Jam (@kavehsroom): Prigioni. This is a guy that probably shouldn’t be in an NBA game anymore, given age and wear and tear.  And yet against the Heat he had eight steals in fifteen rugged minutes — exactly the kind of pestering defense the Clippers could use off the bench.

Roscoe Whalan (@RoscoeWhalan7): Oh, man. What a duo! All I can say is please send a camera when Aldrich gets to visit his farm with a “plethora amount” of cows in Argentina. Please.

2. Are the Kings are Playoff team?
Williams:Nah. They need to shuffle some things around before they’re ready to compete. They have a devastating pick-and-roll duo if they can get some buy-in from their ornery All-Star potentates, but the rest of the Kings? Look, the Clippers may have looked like a motley crew at the beginning of the season, but there’s a method to the madness. Sacramento is a hodgepodge clan of fringe guys and poor fits, and none of it really meshes with Coach Karl’s uptempo, “cattle on stampede” style of play. They may break .500 by sheer will, but in this conference? Forget about it. The first five slots are locked and then you’ve got to bank on proven, reliable incumbents before you look at the Kings.

Jam: Surely on paper they scream playoff team.  They are littered with former and current All-Stars across the board and yet on some nights the chemistry is off-kilter and they go up in a destructive ball of fire.  They could use some real rejuvenation in the off-season — from a roster and managerial standpoint.  While individually they’ve done well — including the resurgence of one Rajon Rondo — the turmoil in Sacramento has continued to be a sordid public drama that has draped a cold blanket on what could be a much better performing team given the talent of their individual parts.

Whalan: Well, a win against the Jazz certainly helped their case and they’re only a game outside of 8th right now. Sure, there’s still more than half a season to go but they’re in a better spot than they have been for some years. I’m still not convinced that there won’t be a total meltdown somewhere along the line though.

3. The streak’s at 10. Will the Clip Show make it 11? Predict when it will end.
Williams: Without Griffin and DeAndre? 11. There’s just no way they overcome the recent run of luck they’ve had against the Rockets lately without their twin towers. Even with them, it seems karma, or psychology, or something is preventing the Clippers from really putting their foot to the floor against Houston. Were I more optimistic, or had the Clippers shown me more at the beginning of the season, I’d say the schedule after Cleveland is imminently winnable, so if they do take down the new Sabretooth to their Wolverine, they’re not losing til the Spurs. Quote me.

Jam: It will depend on the availability of Blake Griffin and DeAndre Jordan.  I can see them knocking off the Rockets who still have to play the Cavaliers and then the Lakers the night before facing the Clippers.  Houston is currently on a five game winning streak but are a wildly unpredictable team this season.  Prior to their winning streak they had lost five of six games.  I don’t see the Clippers getting by the Cavaliers next Thursday on the road.  Streak ends at 12.

Whalan: Well, we’ve jinxed it now by asking this question, haven’t we? 11. Particularly, if DJ and Blake are still sidelined. However, I am bullish on this Clippers team again despite the fact that the streak has really just been a bunch of beat-ups of sub-par teams.