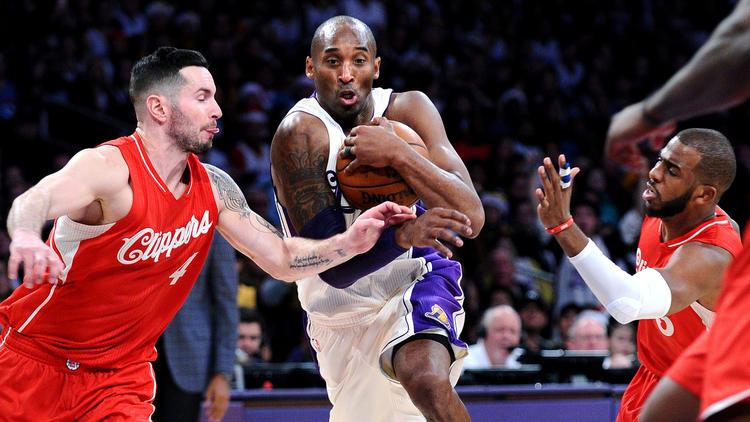 1. Two tight wins to end the road trip. What is it about this team that it always seems to rise up in the face of adversity?
Michael Shagrin (@mshaggy): You could look at this two ways. Option 1: the Clippers are an insanely talented bunch and when they’re inspired to leave everything on the court, there’s only a couple teams who have their number. Option 2: Blake Griffin’s defense isn’t all that great and, on the offensive end, he doesn’t have the range to draw his defender out to the three-point line, which results in better spacing during his absence. I honestly don’t have an answer for you. But Jamal Crawford seems to have given this question some thought: “I think adversity not only builds character, it reveals it,” he said after Wednesday’s road win. What I want to know is whether he was referring to his team’s victory or Blake’s reckless flagellation while sidelined by injury.

Sareen Tavidian (@sarenetavidian): Two consecutive wins does not suggest a whole lot, but the Clippers are doing better than expected considering the media frenzy over this past week. Much like the Lakers, the Clippers are a team capable of moving past the negatives; a challenging task for a league that is no stranger to adversity. The past two years have been a roller coaster ride for the entire league. From the 2014 Clippers ownership ordeal, to the DeAndre Jordan scandal this past summer and Griffin’s most recent unsportsmanlike antics, the team has found a way to thrive in adversity, growing stronger as the criticisms grow larger.

Aaron Williams (@aaronsmarter): I’m not so sure that’s the case. They’ve squeezed out some tough wins, but it was against mediocre competition; these are the teams they’re supposed to beat. The fact that they have to gut out wins against inferior opponents actually bodes ill. Especially since they haven’t finished off any of the good teams they were in prime position to beat, like the Warriors.

2. We shouldn’t feed this beast but it’s way too tempting — what’s your favorite reactionary Blake trade you’ve seen?
Shagrin: None. Don’t trade Blake Griffin. I will not feed this beast. But there is another monster that’s been awful quiet among all the reactionary soundbites… What culpability lies with Doc? He’s never been a Carlisle or Thibodeau on X’s and O’s. The modus operandi for his championship caliber Celtics teams was ubuntu, a philosophy based on unselfish togetherness on the floor and in the locker room. Yet a lot of the time, this particular group of Clippers seems to be about everything but the basketball team. There are commercials and children and coach’s children and podcasts and emojis. Sometimes you just wonder how together a group can be with so many ongoing distractions.

Tavidian: Kevin Durant for Blake Griffin. Naturally, there would be other pieces involved in this trade scenario, nonetheless, this move would make both teams considerably better. Durant plays a better game with a pass first point guard like Chris Paul, which would solve the Clippers issue at the small forward position. OKC would get Griffin allowing for an extremely athletic Russell Westbrook to find his match in another player.

Williams: I don’t pay attention to all that. My Twitter lit up with some nonsense about Kevin Love, but I doubt that trade makes either team better. There was something about the Lakers, but I don’t remember who was in it, and I didn’t take it seriously enough then to try to hunt it down now. Long story short, Blake stays, and hopefully gets a better handle on his temper from here on out.

3. The Lakers are 9-39 but is this season working out perfectly for them?
Shagrin: Yeah, things are looking pretty good in Lakerland. College standouts Brandon Ingram and Ben Simmons both appear to have franchise altering potential and the Lakers have a really good shot at a top-two lottery selection. They’ve already got a few young talents who Laker fans have to just hope aren’t being irreparably harmed by the conservative tone-deafness of Byron Scott’s coaching style… It’s really something how the Lakers can earn justifiable praise at 9-39 while the Clippers at 30-16 seem to have intractable problems. Some things never change.

Tavidian: To be honest, I don’t know if their situation can get much worse. As depressing as it may be to watch Kobe Bryant [one of the greatest athletes in the world] say goodbye to the game he lives for, it’s more depressing to watch a group of young and promising athletes squander in his shadows. Although it’s the hard truth, we are all focused on how bright Bryant will shine during his final season, inevitably he’s preventing the rest of the team from succeeding. Luckily, it is more than obvious that the team has great potential and will hopefully find themselves in a ‘perfect’ situation next season.

Williams: Byron Scott is the sneakiest tank strategy anyone could have hoped for. The fact that his tenure coincides with Kobe Bryant’s victory lap provides a great smokescreen for Scott’s inept management style. The truly beautiful part: nobody knows which of the two is primarily responsible for the Lakers’ meltdown, but both will be out just as the Lakers are benefiting from the results of this season’s farcical spectacle. It’s a win-win for everybody – so to speak.