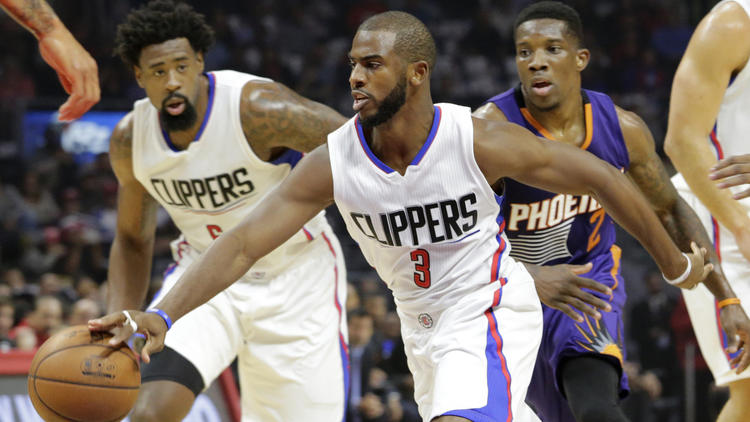 1. Are the Phoenix Suns the saddest team in the NBA right now?
JD Evans: Yes, using the literal meaning of “saddest.” So recently they were so exciting and fun and young and yay! And now they’ve managed to sell off all the excitement and fun and most of the youth and replace it with DeJuan Blair, Mirza Teletovic, and Tyson Chandler, who might be the saddest player in the league, given that he could seriously help any title contender, and is instead doing little other than hoping that Bledsoe can stay healthy for longer than fifteen minutes at a time.

Roscoe Whalan (@RoscoeWhalan): When Ronnie Price is your starting point guard, the times are sad. Injuries have decimated a team that Markieff Morris seemed intent on bringing down and succeeded in doing so before boosting to the East Coast. The problem is, now that the race to the bottom is on, having Tyson Chandler on this team seems like a massive waste.

Aaron Williams (@aaronsmarter): Only if the Minnesota Timberwolves, Philadelphia 76ers, Sacramento Kings, Charlotte Hornets, and New Orleans Pelicans have all collectively decided to leave the NBA and form their own, separate but sad basketball association. This season’s been a trainwreck all around, and if it weren’t for the Spurs and Warriors, it would be the absolute worst season in a decade – including the lockout years.

2. Got any Jeff Green hot takes after his Clipper debut?
Evans: I got some dissent: this was a good move. The pick was protected, the Clips have a lot of rotation guards, and have nearly zero rotation 3/4 types. If all goes according to plan, Green can stand in for Johnson’s corners shooting and LRM’s size and strength. This team was going nowhere with Lance (not his fault); why not go for it?

Whalan: I will reserve judgment on anyone that joins a new team and less than 48 hours later is meant to go to war with his new teammates against the Golden State Warriors. That said, it wasn’t pretty but we should keep our Doc Rivers pitchforks in the garden shed for at least another week…

Williams: Do not want. Look, I was one of the people hollering for Lance Stephenson to get more minutes, and it looked like he was proving me right leading into the break. Then, “inexplicably”, Doc goes out and gets another ex-Boston Celtic — errr, Jeff Green. Green is suddenly somehow allowed to make all the mistakes that got Lance pulled from games where he was also otherwise contributing, despite Green failing to do the same in 20 minutes last night. New team, new “system”, etc… but just going off of previous history, I’m not excited about Green’s potential contributions – but I’ve got hot sauce in my bag (swag) just in case I have to eat these words. I hope I do.

3. True or False: CJ Wilcox actually becomes a serviceable NBA player as a Clipper.
Evans: False, and relevant to question 2: this is what Clippers draft picks look like. Not a bad idea to give them away when they still have some value, i.e., before they’ve been turned into players. Though I wish CJ all the best, and hope he does break out at some point.

Whalan: Ah, another one of Doc’s nice guys! C.J. can play and holds some value — as evidenced by multiple teams vying for his services at the deadline. Unfortunately, he’s way too far down the pecking order to get a chance on the Clips. Now, I’m not saying give him Daniel Ewing minutes in the clutch of a playoff game but at least give the kid some burn decent burn…

Williams: This one hurts. False. CJ Wilcox is absolutely an NBA player, darn it. But no one is ever going to know it if Doc Rivers continues to coach the Clippers after this season. He has only played 37 minutes this season – but wait, that’s not the worst part – in 3.7 minutes per game. THAT’S ONLY 10 GAMES. It’s clear everyone but Doc sees the value in Wilcox, given all the offers we see for him throughout the offseason and trade deadline, and it’s probably only a matter of time until some team finally offers a package featuring another ex-Boston Celtic — errr, just the right player for Doc Rivers’ system and CJ is just the latest Clipper to see the ever revolving door of underused rotation players of the Steve Ballmer era.