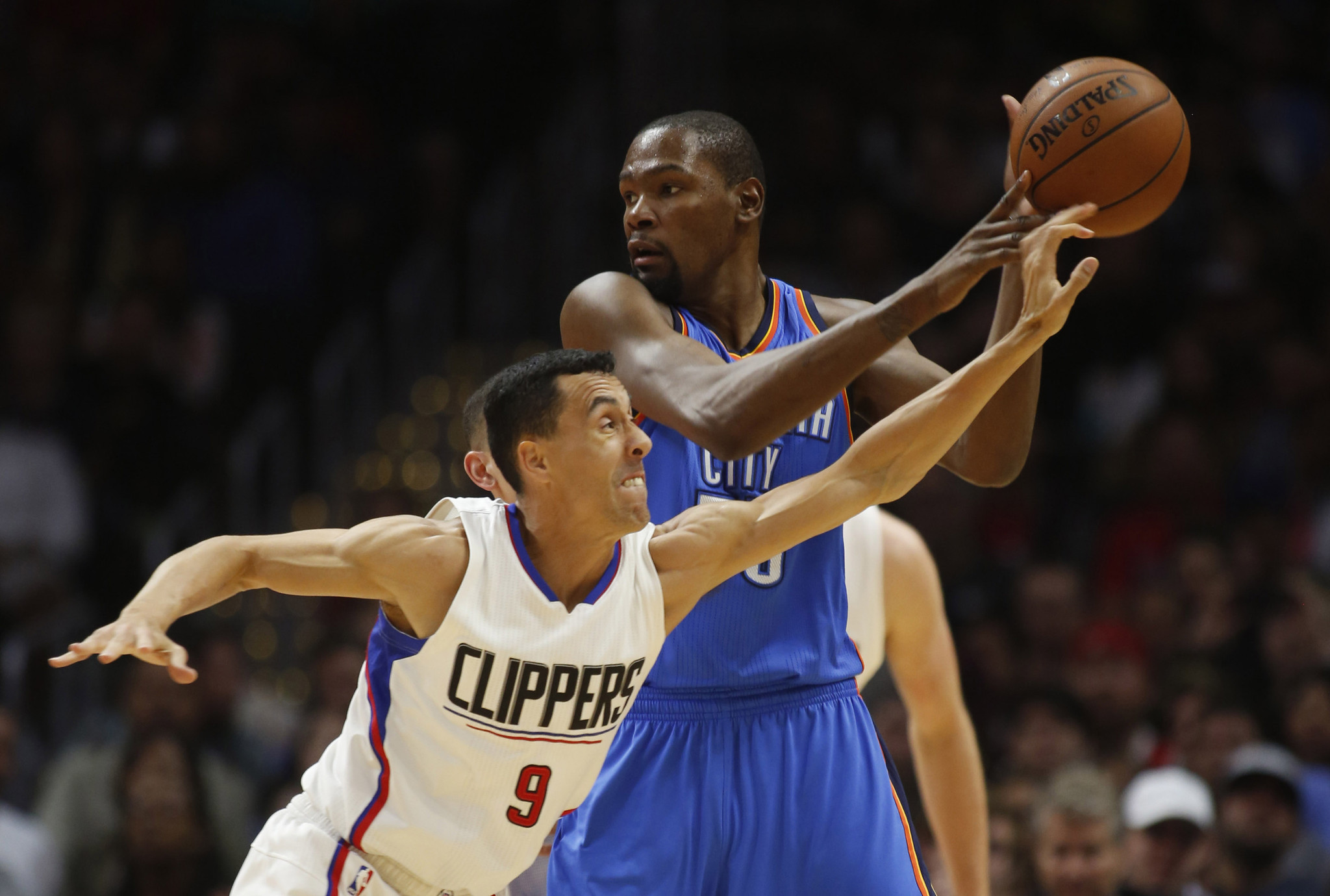 1. The Thunder are 3-6 since the break, what’s going on with this squad?
J.D. Evans: At least in part, this is schedule blip. Of those six losses, four were to championship or near championship level teams (Warriors, Cavs, Clippers). One was a close loss to the Pacers, who just beat the Spurs. The other was the Pelicans, and, well, merde happens. If you’re burrowing for stats, they’re only middle of the pack defensively. And as for sight-test, they might be the most top-heavy team in the league.

Law Murray (@LawMurrayTheNU): Since the All-Star Break, the Clippers have the NBA’s best defensive efficiency rating. The Thunder? They’re all the way down at number 27 in defensive efficiency since the break. Their defense has been worse than every team’s other than the Timberwolves, 76ers, and Lakers!  Oklahoma City really struggles to force turnovers, which is a major problem when they turn the ball over a lot themselves. That poor defense has shown up in the games where they have big leads only to relinquish them. The Clippers won the turnover margin by 11 last week in L.A. during that epic comeback.

Ben Mesirow (@SemNeb): It’s been rough for the Thunder over the last couple of weeks – the defense in particular has fallen apart, getting torched just about every night, and when the defense doesn’t work other issues start to seem a lot bigger than they were before. Things like chemistry, preparation, and effort have become question marks. But maybe it’s just a tough time on the schedule – it’s a weird, sleepy part of the season, and the Thunder have had to run a gauntlet of mostly playoff-bound teams including two games against the Warriors and one each with the Cavs, Pacers, and Clippers. Their schedule the rest of the way is pretty tough, but I think they’ll find their way back to the form they showed in the first three quarters against the Clippers last week, and away from the way they played in the fourth.

2. Who ends up with the better point guard legacy: CP3 or Russell Westbrook?
Evans: Too soon to tell. CP3 might be the last “true” point guard (i.e., point guard as distributor first) we see for a while, so Westbrook will have helped define the way the game is played for the next decade or so (even though he’s a pretty good distributor in his own right). Can a team win with Russ as its best player, though? He might need to shoot better before I’m positive he’ll get ring points in the legacy debate.

Murray: That’s tough. I hate legacy questions for players who are still playing in general. Plus, aren’t point guards players? Why “point guard” legacy? Either way, I’ll go with Paul, because I believe he has been the better all-around player. We’re still waiting on Westbrook’s first placement on the All-Defensive team. And though Westbrook finished 4th in the MVP voting last season with Kevin Durant sidelined, his season ended with his team out of the playoffs and his head coach out of a job. I don’t expect to see talents like Paul’s and Westbrook’s duplicated, but Paul’s insanely methodical and efficient style is taken for granted in a way that Westbrook’s won’t be.

Mesirow: This is an interesting question, especially if you’re only considering point guard-specific legacy. As a pure point, there are very few people who can match CP’s resume. His leadership, his personal counting stats, and the stat bumps (and resulting paychecks) he’s gotten for his teammates are almost unmatched. Russ, on the other hand, will be remembered more as a pure athletic force, a lightning bolt heaved from college basketball’s West LA Olympus straight at the rim. Russ has a lot of career left, and with his talent he really can do anything he wants on a basketball court, but at this point he’s shredding a flamethrowing electric guitar mounted on the front of a speeding truck while CP is conducting a symphony orchestra.

3. What’s the percentage chance of Jamal Crawford winning Sixth Man of the Year again?
Evans: I wanted to say “really low,” but then I tried to think who might win it instead. Iguodala clearly should win it, but the award so often goes to the highest scoring bench players. Ryan Anderson might be that. It’d be really fun if Aaron Gordon won, because then we could have more Aaron Gordon gifs. But otherwise, the competition is minimal. Ten percent chance.

Murray: Zero. There’s no way JCrossover is going to take home the award in a season where he’s averaging his fewest points per game in 13 years. The stretch he is on is magnificent, and he already is the oldest winner of the award (34 years old in 2014). But of all 12 players who have taken at least 500 shots off the bench so far this season, Crawford is the only one shooting under 40 percent. And we all know Crawford’s value for the award is in the point total. I’m a huge Jamal Crawford fan, but there’s no way he takes the award over someone like Will Barton, Dennis Schröder, or Enes Kanter.

Mesirow: 15% – Jamal is still in the race because he plays an important role on a good team. He’s a fun, high-visibility candidate with a ton of highlight plays both on his own and through his good pick and roll chemistry with DeAndre Jordan. But it’s a crowded field this year, with a lot of legitimate contenders in Ryan Anderson, Andre Iguodala, Will Barton, and more. I think Jamal’s slow start will hurt him, as will the fact that he’s won it before, and I expect voters to reward someone new.