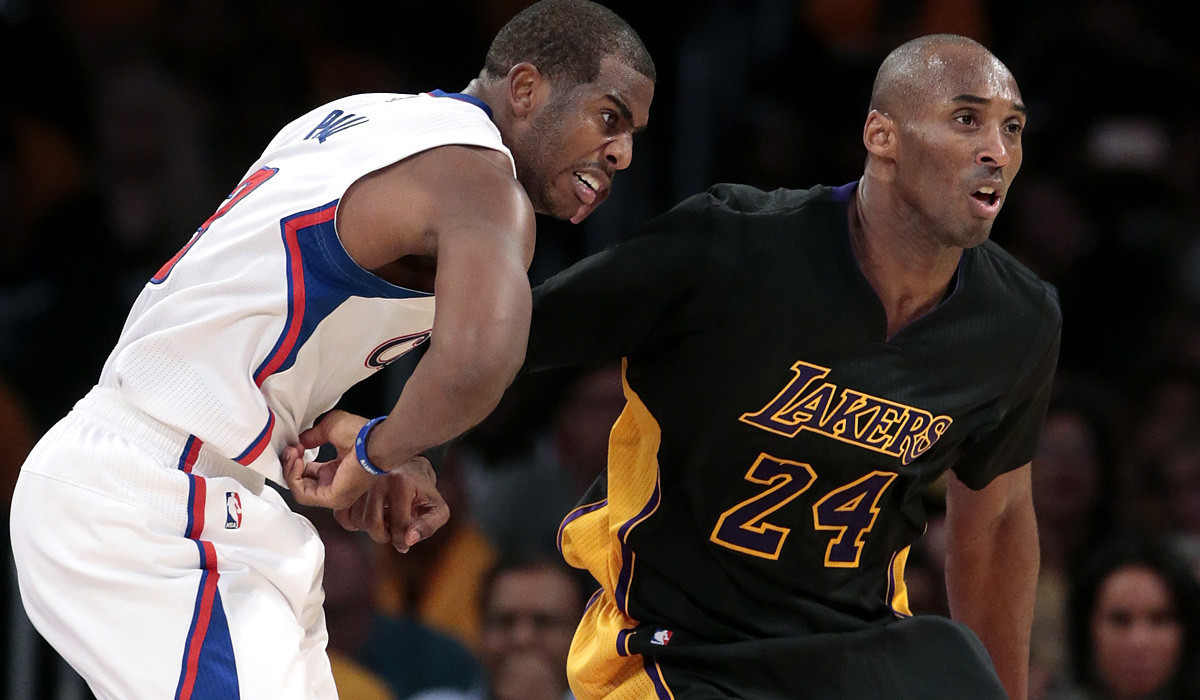 1. Guys, Blake Griffin is back! Is that what you expected in his return?
Law Murray (@LawMurrayTheNU): I wasn’t sure if numbers was going to be a fair way to evaluate Blake Griffin’s return. Sure enough, six points on seven shots is underwhelming, but a +22 in a five-point win is quite eye-opening. It was almost like Griffin was super-Paul Pierce! It’s only one game, and Griffin’s limited minutes suggest that he will be eased in indefinitely. One thing is for sure — Sunday’s game against Washington was not like Griffin’s return from injury in March 2015.

Ben Mesirow (@SemNeb): He looked a little tentative, a little stiff, and generally like a guy who hadn’t played since Christmas, so yup, that’s about what I expected. But he also showed plenty of flashes of the Blake Griffin we’ve all come to know – lots of people got excited about that alley-oop, but there were two plays that had me even more pumped up: his first assist, a perfect drop-off from the post to a cutting Mbah a Moute for an easy finish, and an attacking, spinning, high-arcing layup off the glass for his second (and final) bucket of the night. Even if he’s rusty, it’s great to be reminded of just how electrifying Griffin can be.

Kaveh Jam (@kavehsroom): It was as much as I expected considering the long layoff. Even the 24 minutes was a little longer than I thought he would play. For a guy who thrives by overwhelming defenses on athleticism, it is going to take more than a few games to regain the type of conditioning that necessitates. Rhythm and timing – especially on his jumper and fielding passes cleanly – should come as the minutes begin to increase.

2. Thoughts on the D’Angelo Russell-Swaggy P scandal?
Murray: I discussed this with Keith Closs last week on ClipperBlog Live, and he was much more intolerant about the situation than I was. As far as Russell and Young go, they both messed up. Young is having the worst year of his career, and he’s in another situation where a struggling organization is going to move him away from their young star (RE: John Wall in Washington). Russell has apparently lacked mature judgment for most of the season, and this incident seems to just be the low-light. Look at it this way – the Lakers probably need a culture overhaul. Everyone is calling for head coach Byron Scott to be replaced, but the Lakers take care of their guys – remember, Scott was a TV analyst on Time Warner before he took the head coaching job two years ago. Moving Young and Scott will only do so much – especially with Scott potentially staying close to the organization.

Mesirow: Pass. It’s just a bad look for everyone involved – D’Angelo, like many 19-year-olds, did a dumb thing, and Nick Young, like many exuberant young millionaires who like to party, did a dumb thing too. This is just another in a long string of unpleasant interactions for the Lakers this season, both on the court and off.

Jam: Can’t decide whether the situation is a comedy or a dysfunctional drama. Debating the specifics of the dispute is a waste from a basketball perspective. Young’s exit appears mere formality and Russell is obviously more organizationally valued – juvenile transgressions notwithstanding.

3. Do you ever think about the sliding doors scenario where CP3 ended up in LA in the purple and gold? How does that scenario end the twilight of Kobe’s career?
Murray: I don’t think about it ever. That veto of the Chris Paul trade was one of my favorite moments in Lakers history. I’m so glad that we didn’t have to watch Paul and Bryant try to figure out who was giving up the ball the most. The bottom line is, those Lakers were going to be coached by Mike Brown, Bryant’s body would have continued to break down, and Dwight Howard (the third part of this equation) may have rubbed both competitors the wrong way. It would have just changed the sorry excuses from #LakersNation, and it’s for the best that we saw Paul revive the other L.A. franchise — at least temporarily.

Mesirow: Honestly, the only time it crosses my mind is when Laker fans bring it up (so ALL THE DAMN TIME). I think that’s because I’m not sure it would have the Lakers in a better spot than they’re in now – both CP3 and Kobe are insanely competitive and dedicated, but they both need the ball, they both need to be the focal point of the team’s offense, and they both need sole possession of the team’s leadership role. It’s fun to think about how their games might have meshed, but the answer I keep coming to is that they wouldn’t have. Can you imagine Kobe running circles around the baseline like Redick, or Paul standing in the corner while Kobe takes 21-foot fadeaways? Me neither, and I bet CP would be somewhere else by now anyway.

Jam: That incident set off a chain of events that triggered the beginning of the end of the Kobe/Pau Lakers. The franchise has amassed a .393 winning percentage since that failed trade, easily the worst stretch in their history. It is doubtful the Paul addition alone would have directly led to another title unless the Lakers had other moves in mind – which is possible. What Paul’s addition would have guaranteed is one of the most competitively maniacal backcourt’s in league history. The move not only changes the final chapter of Kobe’s career but effectively shifted the directional sails of two other franchises in the Houston Rockets and New Orleans Hornets.