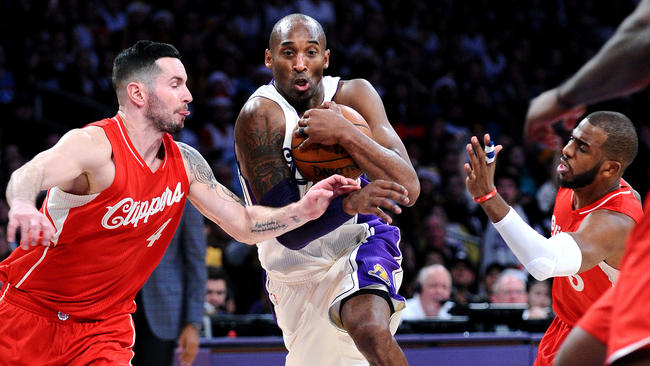 1. Any parting words for Kobe as a writer on a Clippers website?
J.D. Evans: Dear Kobe! You are an excellent, excellent, all time great basketball player, but there is simply no way it would have worked with you and CP3. Can you even imagine the carnage in the locker room with that much competitiveness floating around? Nick Young might have died of a heart attack two games in to the season.

Aaron Williams (@aaronsmarter): Eh. It’s too bad you never went through with that trade, Mamba, but I suppose it all worked out for the best.

Roscoe Whalan (@RoscoeWhalan): Dear Kobe Bean, L.A. will never shine as bright again without you. You are an all-time great and insane competitor. All that said, there’s been no greater thrill than crushing the Lakers routinely in the past few years and I hope even without you that trend will continue. Nothing personal.

2. The Clippers are locked into the fourth-seed, who would you like to see finish fifth?
Evans: I’m pretty happy with all the options. The Grizzlies have what, one? Two healthy players? And they’re both one-time Clipper small forwards. Portland is better than I expected, but I can’t see Lillard and McCullum defending Paul and Reddick all that well. Dallas and Utah are a step below that. So if forced, I’d say Memphis, purely because of all the injuries.

Williams: Easily Memphis, so the Clippers get a nice, smooth road into the second round. However that’s looking less and less likely, what with their injuries. It’s starting to look like Portland is going to be the ones to beat though – and that’s looking quite tough.

Whalan: Memphis for the win and Portland for the entertainment. Look, we know how that Grizzlies series is going to play out. The Portland one may be trickier and certainly would feature some Lillard heroics in at least one game. Anyway, we all know how it goes: the Clippers win round one and everyone comes into the second round completely gassed with hamstring strains.

3. Buy or Sell: Blake Griffin playing extended minutes at center.
Evans: Sell. It’s worth a try, but I can’t imagine the Clippers defense holding up for more than a few possessions under those circumstances. A better option, I think, is playing him extended minutes with the bench, and going small around Jordan. They’ve been doing that with some success since Blake went down.

Williams: Depends on the matchup, no? I wouldn’t run him up against a miraculously revived Marc Gasol, but I’d love to see the rumble down under with Draymond Green. If things shake out the Clippers’ way, I could even see him reprising his role against Tim Duncan from last year’s Playoffs. I don’t see him managing the big Aussie Steve Adams. Blake off the bench could easily wrangle other teams’ second stringers.

Whalan: Can I put this one on lay-by? I’m still not sure I’m buying that “Blake Griffin is back”. His first couple of games have been understandable rough and if he’s not playing on the second night of back to backs then he only has a few games left to find some rhythm without completely messing with the mojo the Clip-Show has developed over the past three months.