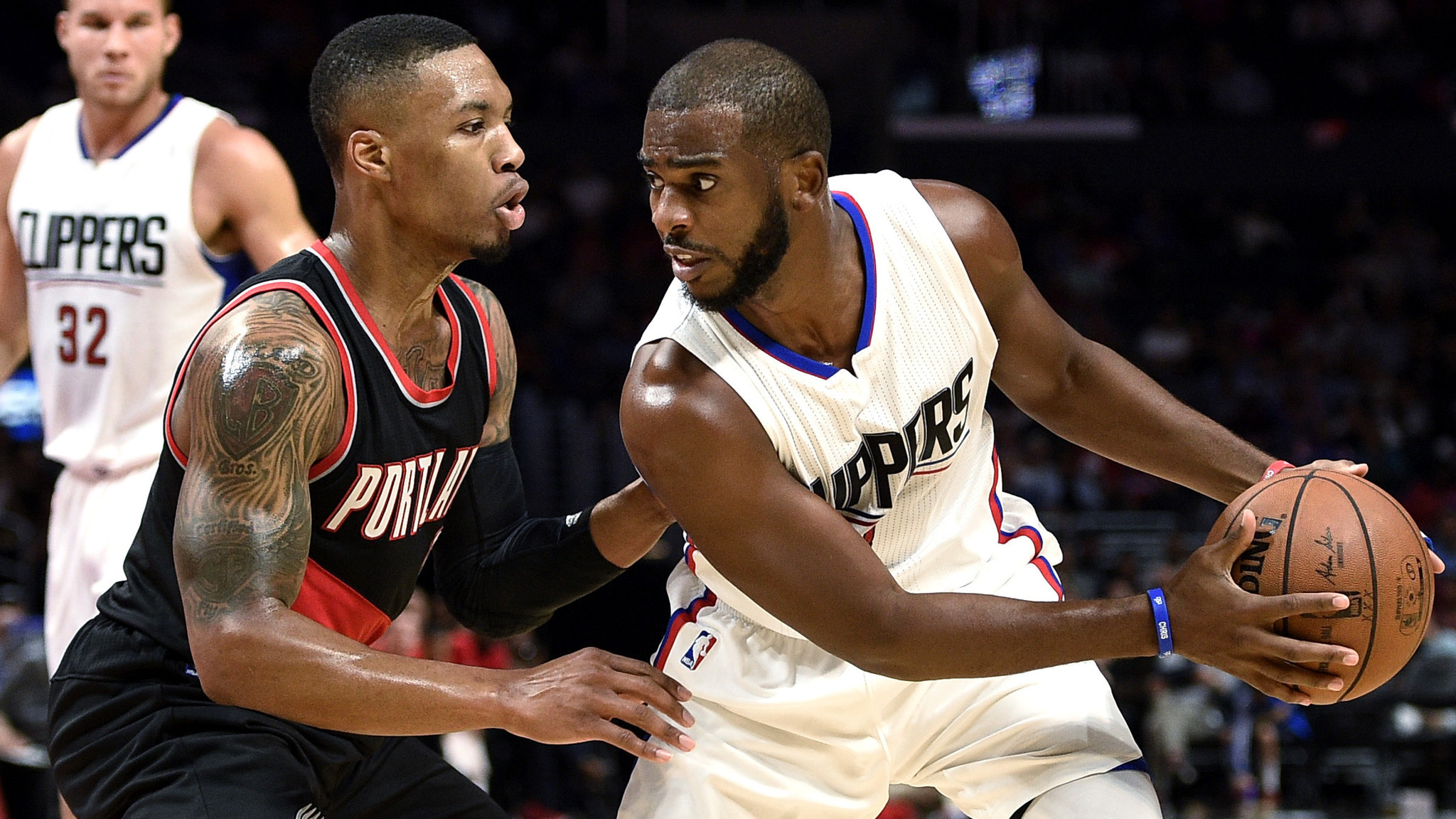 1. True or False: This is the best first round series.
Aaron Williams (@aaronsmarter): Unsure. Heat-Hornets and Raptors-Pacers both look like intriguing matchups with interesting potential for wild upsets — or for Toronto to finally make it out of the first round. We’ll say the Clippers are the most exciting matchup in the West.

Ben Mesirow (@SemNeb): Well, that depends – does best mean most competitive or most fun? Because I doubt this series will be the most closely contested (that honor should head East to Miami-Charlotte or Boston-Atlanta), but it may well have the most star power and firepower. Paul and Lillard bring the best out of each other, and there are few things as purely enjoyable as watching heated CP battle heat-checking Dame.

Kaveh Jam (@kavehsroom): False. I count three series in the East that could legitimately swing either way. Toronto has their hands full with 7-seed Indiana, Miami-Charlotte has the makings of a slug fest, and Atlanta-Boston could easily go the distance as well. But Clippers-Blazers will arguably offer the best backcourt battle in the first round.

Brandon Tomyoy (@dingyu): I doubt any first-round series in the Western Conference will end up deserving of the title of “best,” and judging by Saturday’s games, it’s probably not a hot take to consider the Eastern Conference the better conference to watch for playoff basketball at least in the first round. Has there even been a time prior to this season where the 3 through 6 seeds in any conference all finished with identical records, with seeding determined by tiebreakers? With how close so many of the teams are, there’s a good chance of multiple seven-game series in the East. The Western Conference will be lucky to get one.

JD Evans: In the West, sure, but there’s no competition. Three series in the East have a better chance of going to seven than this one, so it’s hard to say it’s the best as far as tension goes. On the upside, it might be more entertaining than those Eastern series, because watching Lillard and Paul go head to head is going to be great.

2. What keeps you awake while you’re lying in bed each night about the Blazers?
Williams: Whether this week will be the one I make my triumphant return to #4BarFriday. True story: I was one of the first maybe eight people to do a video when Dame Lillard started the idea on Instagram, as a favor to a friend. The only worrisome aspect of this pairing is whether the Clippers – like most bullies – lose their will to fight when the Blazers inevitably smack them in the mouth at home in Game 4.

Mesirow: The one thing I keep thinking about is the fork that Dame Lillard stuck in Houston in the 2014 first round. That was an incredible shot, especially for a guy in just his second season, with an established star in LaMarcus Aldridge already there. He’s ruthless, and I can see him winning a game all by himself.

Jam: Their backcourt can single-handedly win games. Lillard alone has potential to shoulder an offensive load for extended periods as evidenced by the 51 he hung on the defending champs in February.

Tomyoy: How many offensive rebounds that Ed Davis will grab. McCollum and Lillard are indeed explosive, but their amount of offense is often nullified by their poor defense. That defense needs to follow up with the position arrow moving in the other direction, and Ed Davis has continually gotten in the way of that this season. The only loss the Clippers had against the Blazers this year was largely a result of the advantage they had on the offensive glass.

Evans: The back court, obviously. It’s hard to believe Portland can win the series, but if Lillard and McCollum can both find ways to score consistently, they could steal enough games to make it more interesting than it should be.

3. Multiple choice time. What’s the most likely to happen:
a. Blake Griffin returns to 2014-15 Playoff form;
b. Paul Pierce spawns into Playoff Pierce;
c. Austin Rivers wins the Clippers a game; or
d. C.J. McCollum is left off of the active roster.
Williams: A little of A, a little of C. For some reason we watched Lil’ Rivers turn it on last year’s playoffs, and I wouldn’t be entirely shocked if he were to do it again. Meanwhile, Griffin has missed time before, and worked his way back into a beast — and I get the impression that he’d play through a lot of pain this time around.

Mesirow: I would like to see them all happen, but I think C is the most likely – Austin Rivers is a streaky dude, for better and for worse, and if he gets on a roll he can be the difference in a close game. I expect Blake to look good against Portland, but 2014-15 Playoff Blake was truly incredible, Pierce may hit a big shot but will never bring anything resembling playoff defense, and I bet Terry Stotts will double and triple check that roster card before every game.

Jam: I’ll go with C by process of elimination. Not many of these options appear likely. There is actually a good chance Blake Griffin may not be a huge factor this spring given the season he’s had and the small window to regain his timing. Rivers, though, has shown he can have sudden breakouts against unassuming teams that might have him low on the scouting report.

Tomyoy: It’s entirely possible for Blake Griffin to return to form as well, but the question mark will be if six games was enough time to work out his kinks with timing and overall rhythm. His handles indeed looked better by the game in Memphis, as did his jumper, but he hasn’t faced a heavy load of minutes in his time back, either, so endurance may be an issue. Austin Rivers, on the other hand, is averaging 16.9 points per 36 minutes since his return from injury, highlighted by that 32 point performance in Oklahoma City. He’s playing far better than most would want to give him credit for, and it wouldn’t be a surprise to see him in some defensive lineups in which he’s placed on Lillard or McCollum to let Chris Paul save most of his energy for the offensive end. So I’ll go with C.

Evans: C, though like question one, this is more about the other options than the chosen one. Griffin’s too out sync; Pierce hasn’t shown the signs he did through the regular season with the Wiz, and presumably every coach, intern, and mop-boy and girl will be double checking the paperwork for Portland. And Austin does strange things sometimes.

4. Over/ Under 104.5 DeAndre free throws in the series?
Williams: I don’t think it goes enough games, and I think DJ makes enough of his free throws early on that Terry Stotts will think twice about continuing that dreadful practice.

Mesirow: This is very similar to asking how many games you think the series will go – if you think it’s a long and tightly contested series, you take the over. I’ll go with the under, though I think that number is pretty close.

Jam: Over. Terry Stotts has been on record as being a big proponent of the hack-a-whoever strategy. His reputation in this regard precedes him. In a December matchup against the Clippers, Stotts had the Blazers hack DeAndre Jordan to the tune of 18 free-throws in a 2-minute span of the fourth quarter. Albeit, Portland lost the game but only because their offense failed them. In Game 1 of their 2014 first round series vs Houston, Stotts implemented a hack-a-Howard on Dwight Howard, who missed 4 clutch free throws, opening the door to Portland’s win. After that game, Stotts compared the strategy to an “intentional walk” in baseball.

Tomyoy: Keep in mind that in the first game the two teams faced off at Staples Center this season, DeAndre Jordan shot 34 free throws. That’s the most trips to the line he had all season, and nine more attempts than the next highest total he had this year. In fact, two of his eight highest free throw attempt totals this season come from games against the Blazers. I’ll take the over.

Evans: Under, because that would presumably take six games, and dear God please don’t force us to watch six games each taking five hours and comprising mostly multi-millionaires standing around on some wood that’s painted for some reason nobody’s ever been able to explain.

5. Who wins this series and how many games does it take?
Williams: Clippers in six. The Blazers’ weakness is their front line; Blake and Deandre will bully them for the entirety of the series, but Dame Dolla’s signature late-game heroics will steal one, and the Clippers will be so shocked they’ll let another slip away, because that’s what these Clippers do. They will remember that they are the better team and finally take care of business in Portland.

Mesirow: I think it will be a fun, exciting, fast-paced five game series in the Clippers’ favor.

Jam: Clippers in six. Ultimately, the Clippers have 2 elite big men that should wear down Portland’s interior. The pressure to outscore the Clippers is squarely on the Blazer backcourt. Meanwhile, the Clippers are much more efficient manufacturing easy baskets. L.A. has perimeter shooting that can contend with the best but are also second in the league at FG% in the restricted area.

Tomyoy: Clippers in five. This prediction is largely assuming that J.J. Redick doesn’t have any persistent issues with the left heel contusion that he experienced against Memphis. Redick is the pilot light that ignites the Clippers offense, taking it from ember to conflagration, and will give Portland’s 20th ranked defensive rating absolute fits. Their 16-25 road record — tied for worst record among all playoff teams this season — should also be considered, especially when the Clippers road record of 24-17 is tied for 3rd best among all teams.

Evans: Clippers in six. They have three of the best four players in the series, the bench plays basketball now, and they can pick and roll the Blazers to death. They should win sooner, but I fear they’re looking ahead to the meat-grinder. This is no disrespect to Portland, who’ll be terrifying next year.